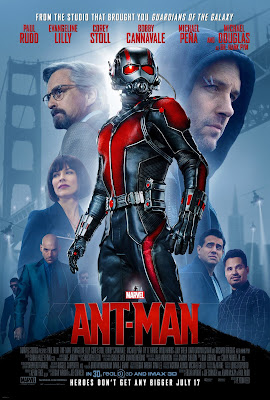 Armed with a super-suit with the astonishing ability to shrink in scale but increase in strength, cat burglar Scott Lang must embrace his inner hero and help his mentor, Dr. Hank Pym, plan and pull off a heist that will save the world.


I have to admit that despite reading a lot of different Avengers comic books, I was never that big a fan of the character of Ant-Man.  I could never place my finger on why but the stories involving Pym and his alter ego's just never hooked me in as much as the other members.  So with that in mind, I didn't really pay that much attention to the announcement that a movie was going to coming out helmed by the character.

Well, I finally got around to seeing it today and I have to admit that I actually found myself  really enjoying it to the point that I wanted to pick up some of the comics with him in to take another look at his back story.

The first thing that struck me was the simple fact that while this movie was exciting and had some absolutely fantastic action scenes in, there was a real sense of wonder and fun that ran through the entire run time of the movie itself.  The idea of a person having made many mistakes in their life and then wanting to wanting to redeem himself isn't a new one, not even in the Marvel movies themselves, but you can't help but find yourself rooting for the Lang character played by Rudd.

A lot of that is down to the brilliantly paced writing and editing here.  Each time sometime goes wrong for the character, you can't help but feel sorry for him.  Rudd's performance is the cause of a lot of that and he really does bring the character of Scott Lang to life in such an impressive way that I can't wait to see what he will do with the character next.

Talking of the characters, I was quite surprised with the choice of Michael Douglas as Hank Pym but he really gives the character a sense of cynicism and hope at the same time.  The chemistry between Douglas and Rudd gives the characters of Pym and Lang a father/son style relationship and that really adds another layer to them.  It's the same with Evangeline Lilly as Hope, although I wish they could have done a little bit more with the character.

All in all, this is a great addition to the Marvel movie universe.  It's not the best movie in the collection but there's a great sense of fun, adventure and wonder that runs alongside some brilliant performances and that makes this a movie that comic book fans should definitely take a chance on and see.  I know I did and it's made me want to check out some of the other stories involving Ant-Man again to see if my opinion of the character in written form as changed at all.

Posted by Pat Scattergood at 08:02