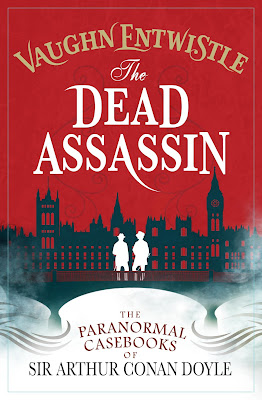 
1895. Victorian England trembles on the verge of anarchy. Handbills plastered across London scream for revolution and insurrection. Terrorist bombs are detonating around the Capitol and every foreigner is suspected of being a bomb-throwing Anarchist lurking beneath a cape. Even Palace officials whisper warnings of a coup-de-tat.

Dr. Arthur Conan Doyle is summoned from a peaceful dinner in the palm-room of the Tivoli restaurant to the scene of a gruesome crime that has baffled and outraged Scotland Yard's best. A senior member of Her Majesty's government has been murdered—assassinated—in the most brutal and savage fashion. The body of his attacker lies several streets away—riddled with pistol bullets that inexplicably failed to stop him from carrying out his lethal mission. More perplexing, one of the attending detectives recognizes the dead assassin as Charlie Higginbotham, a local Cockney pickpocket and petty thief. However, Higginbotham is not just an improbable suspect, but an impossible suspect, for the young detective collared Charlie for the murder of his wife and watched him take the drop two weeks previously, hanged at Newgate Prison.

Conan Doyle calls in his friend Oscar Wilde for assistance and soon the two authors find themselves swept up in an investigation so bizarre it defies conventional wisdom and puts the lives of their loved ones, the Nation, and even the Monarch herself in dire peril.

The murders continue, committed by a shadowy cadre of seemingly unstoppable assassins. As the sinister plot unravels, an implausible theory becomes the only possible solution: someone is reanimating the corpses of executed criminals and sending them shambling through the London fog ... programmed for murder.

When I reviewed the first book in this series, The Revenant of Thraxton Hall, I was taken with the pacing, the twists and turns and the casting of Sir Arthur Conan Doyle and his friend Oscar Wilde in the Sherlock Holmes style characters while they attempted to solve a supernatural mystery.  It was a great first installment and that mean that I was very eager to get to read this one.

The first thing that I noticed about this second installment is that it is a lot darker than the first novel and that gives us an absolutely absorbing story that has some truly shocking moments.

The story itself is extremely well paced.  Because of that, the characters move quickly during the mystery itself but Entwistle has written this is such a way that there are some very well written moments where the characters grow as the novel goes on.  Oscar Wilde, at times, can come across as a rather reluctant partner in the detective team up but there are other times that he seems quite over excited about helping.  I loved that his personality was so well written and written in such a fun way that he leaped off of the page.

I also liked the retelling of the relationship between Doyle and his second wife.  He did come across as a bit of dick during a couple of moments here but that was a good thing in a way because he didn't come across as perfect and that's a good way of writing a character.  I've always hated the types of books where the main character is purer than driven snow.  Here, that isn't the case.  He makes bad choices, he makes mistakes and I loved that.

All in all, this is a truly interesting and sometimes shocking second installment of the series and I can't wait for the next one.