Made To Kill Review 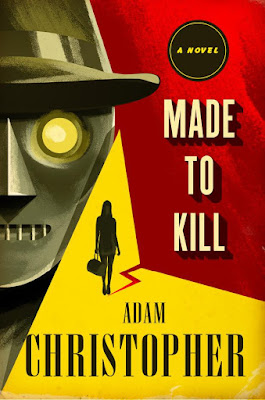 
Ray is the perfect detective – tireless, logical, and efficient, with a knack for wry one-liners. He’s also the last robot on Earth – turns out people just don’t like robots, even if they like the idea of them.

As the lone employee of the Electromatic Detective Agency – except for Ada, office gal and supercomputer, the constant voice in Ray’s inner ear – Ray prefers to stay out of sight. So when a familiar-looking woman arrives at the agency wanting to hire Ray to find a missing actor, he’s inclined to tell her to take a hike. But she has the cold, hard gold – and Ray was programmed to make a profit. Plunged into a glittering world of fame, fortune, and secrecy, Ray uncovers a sinister plot that goes much deeper than the silver screen – and this robot is in the wrong place, at the wrong time.

Adam Christopher is fast becoming a writer with a reputation for being incredibly versatile with his writing so when I read that his next release would be an old fashioned detective story but featuring a huge robot then I was very eager to get my hands on it.

After reading it, I can honestly say that this book is yet more proof that he really is as versatile as a lot of his reviews make him out to be.

Story wise, this novel has all the ingredients of being a classic but that's not just hyperbole on my part.  Christopher manages to create a story that wouldn't feel out of place in a Humphrey Bogart movie yet does so while mixing in science fiction, huge robots and more.  Talking of robots, another majorly impressive part of the book is that you end up feeling like Ray is human.  Despite all the scenes that describe the various things that this robotic detective can do, Christopher manages to make him seem completely human and sympathetic at the same time.

It's the same with the other characters too.  There is a long cast list here and each one manages to have their own personalities, lives and even motives for their actions in the story no matter how big or small a part they play.

However, my favourite part of the book is quite simply the fact that it never stops being surprising.  The novel starts off as a simple missing persons case for Ray and stays so for a chunk of the book.  You start to feel settled in that, this is what the story is going to be but then it takes off in a massively different and surprising direction.  I loved that twist and, for me, it made the book a must have in my collection.

All in all, this is an utterly brilliant, well paced book with so many surprises and twists that I wouldn't be surprised if you would have to read it multiple times to catch them all.  The story doesn't get stuck in the idea of a robot detective, instead making the character seem more human than a lot of the others involved.  A definite must have.