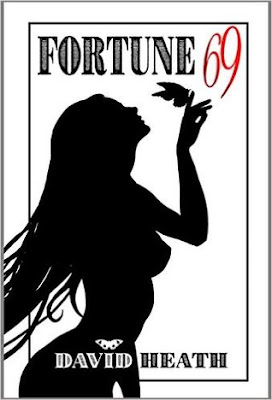 
Trigger is once again sitting at home in front of his computer; only this time, he's got a stomach full of powerful anti-depressants and gin. As an outcast that's becoming disillusioned by society's increasing addiction to social media, he decides to end it all.

He posts his suicide note on Fortune-69.com, his digital playground of choice, but things don't go exactly as planned. When Trigger unexpectedly wakes up the next morning, he quickly learns two things: at some point during the night he unknowingly posted an inspirational message that was deleted by moderators, and that he now has a legion of anonymous followers who want to follow his every command.

Trying to find a way to cope with his bizarre family history, Trigger finds himself tangled up with a sexually liberated cosplayer who pushes him to his limits and a mysterious hacker, intent on changing the world through digital anarchy.


I mainly know David Heath through his stellar comic book work so when I had the chance to take a look at one of his novels, I jumped at the chance.  I read the book but when it came to actually writing the review for it, I struggled.  I didn't struggle because it's a bad book, far from it.  I struggled because it's a very hard book to explain and get a proper handle on.

The first thing that struck me the most about the novel was the writing style.  It's simple, in a good way, and almost lyrical in places.  That leads the story to flow very well in such a way that you can't put it down.  Another thing that struck me was the fact that while you could see some of Heath's influences, such as Chuck Palahniuk, he puts them forward is his own unique voice.

The story itself is incredibly bleak, although just reading the synopsis should prepare you for that but Heath manages to still infuse a rather dark sense of humour through the entire story.  In fact, those moments sometimes take the form of making you ask yourself if you should be laughing at it.  I liked that approach because it really made the bleak and unforgiving landscape portrayed by Heath one that really did come to live.

Characters wise, I would have liked to have seen a little more more depth in places but the main characters of Trigger and Charity are very well thought out.  They're flawed, broken and sometimes intensely unlikable yet you find yourself caring about them regardless of that.  It's a bit of a strange feeling to spend some of the book hating the characters but then managing to find a form of sympathy for them no matter how small it appears to be.

For me, there were two parts that stuck out a little bit.  There's a scene that is very shocking about halfway through that really sticks in your head.  It felt like a sledgehammer to the gut and I can see why some readers didn't like it and I can see why some readers felt it really ramped up the intense atmosphere of the novel itself.  Personally, I wasn't offended by it's inclusion, it just felt a little bit like it needed a slightly stronger set up for it to truly be effective but with it as it is now, it still works and works very well.

The other part of the book that stuck out for me was the simple fact that the ending felt like it came out of nowhere.  Fortune 69 had done a very good and very effective job at building up the tension to a point where you felt like something huge was going to happen.  Don't get me wrong, it's not a bad ending at all.  It's just that I felt like there should have been a little more to it but the other part of me liked the bleak and dark ending because it really kept in pace with the rest of the story.

All in all, for a debut novel, this shows Heath has a very good head for stories that will stay with you long after the novel has ended as well as stories that have a dark underbelly to them.  If this is a debut novel then wait and see what his others will be like once he has more experience after his pen.