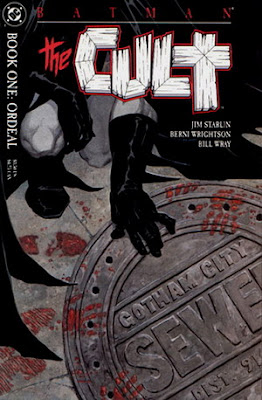 
Deacon Blackfire, a charismatic shaman with roots as old as Gotham City itself, has amassed the city's homeless into an army, one he seemingly uses to fight crime. But Blackfire has a hidden agenda!

When I was given the four book mini-series called The Cult, I wasn't all that sure what kind of story this would end up being.  I've read some of Starlin's other work so I knew it would take a psychological look at the story but, and I'm being honest here, I'd never heard of this series despite being a huge Batman fan.

Story wise, I was right in thinking this would be a psychological story.  The way Starlin's writing takes not only a look at the mental damage the actions of Blackfire have on Batman but also a look at what the story does to the inhabitants of Gotham City itself.  I loved that approach to the story because of the simple fact that I was positively hooked from the very first book right up to the very last word.

There are some absolutely brilliant twists and turns in the story.  In fact, there were moments where I actually believed that there was no chance that Batman could pull through this and he definitely hasn't unscathed.  The repercussions of this story would go on to be felt in his other stories for a long time.

I didn't really know all that much about Blackfire as a character but after seeing him here, I'm definitely going to take a look to see if there are others involving him,

Art wise, if you are familiar with the comics of the late 80's and early 90's then you know what to expect.  With this one, the art does take the sometimes gaudy colours and angles used by the art team and uses them to incredibly effective results.  That's most true in the scenes where Batman is battling against his descend in to insanity.  I couldn't take my eyes off of the panels and each little detail there ended up being so important that you could read those pages over and over again yet still find new little bits that you had missed before.

All in all, this is an absolutely fantastic story and one that deserves to be a lot better known than it currently is.  I would even go so far as to say that not only is it one of the most under appreciated issue in Batman's long comic book career but it's also one of my personal favourites.