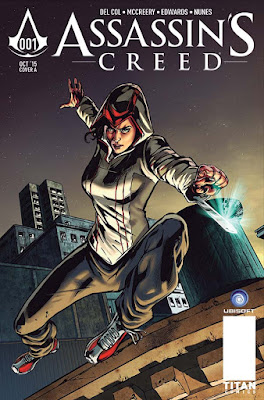 There are shadowy forces at work in our world.

Forces who have battled for dominance since the dawn of human history.

One seeks stability through order and control.  The other, progress through liberty and free will.

They are rumors.  They are real.

They are about to enter the life of Charlotte de la Cruz...

As a massive fan of the Assassin's Creed series of games, I was quite eager to see what those folks at Titan Comics were going to do with their spin off comic book series.  Would they stay true to the feel of the game or would they go their own route entirely?

Well, with this being the first issue, they appear to have ended up with a mixture of the two.

There's a fair bit of action and adventure in this installment and that really gets this series off with a bang.  It's also a bit of a weakness for the issue too,  The simple fact is that the while the issue is action packed and will thrill the fans of the series, I felt like it was a little light on characters.  You have them all introduced here but it's done rather quickly and there really wasn't all that much to get them to distinguish them from one another.

That said, the fast pacing also works in its favour too because of the simple fact that there is so much firing on at the same time that you can't wait to see what is going to pop out next.  I loved that feeling, which almost felt like an action movie at times, because of that the story moves along in such a way that your eyes are drawn to each section on the page.

With the writing giving the story that feeling, the art needed to be fast and furious as well and that is definitely the case here.  Personally, I would have liked the art to have a little grimier feel to it but that said, the clean art here does a good job of bringing the story alive.  I would even go so far as to say that the art reminds me of the style that you see in the Marvel and DC comics that are coming out recently.

All in all, this is a very good first installment in to this series and I'm sure that fans of the game series will definitely like this one.  I know I did.