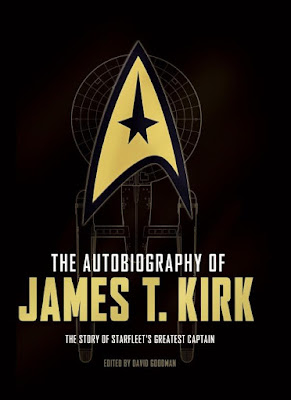 Edited By
David A. Goodman


The Autobiography of James T. Kirk chronicles the greatest Starfleet captain's life (2233-2293), in his own words.

From his boyhood on an Iowa farm, his youth spent on Tarsus IV, his time in Starfleet Academy, his meteoric rise through the ranks of Starfleet, and his illustrious career at the helm of the U.S.S. Enterprise, this in-world memoir uncovers Captain Kirk in a way Star Trek fans have never seen.

Kirk's singular voice rings throughout the text, giving insight into his convictions, his bravery, his commitment to life - in all forms - throughout this Galaxy and beyond.

The Autobiography of James T. Kirk serves as a profile of courage and a celebration of a beloved Starfleet hero,

When I see that a memoir is being released of a fictional character, I always wonder just where on the side of quality it will fall.  A lot of the ones that I have read have been really awful to mediocre at best.  In fact, it's rare for a writer to really nail just what makes a character so popular while giving it a unique voice in this sort of book.

The Autobiography of James T. Kirk is one of those books that breaks that run of poorly written character memoirs.  In fact, reading through this one, you can almost forget that he is a fictional character because you spend so much of the book being sucked in to his world.  His life and the worlds that he inhabits are so well written that, despite being entrenched firmly in the science fiction world, they come across as believable and realistic.

The creators of this book do a truly fantastic job of recreating Kirk's unique voice and personality here but they manage to do something really impressive.  The writing actually gives the character a lot of extra layers and you really see some new sides to the legendary and incredibly popular character.

There are some really memorable moments described in this memoir.  They tackle the Khan / Spock story line in such a way that it not only evokes the feelings that the movie gave the fans but also tells it from a different point of view,  That leads it in to the reader being able to see just what a massive effect it had on all the characters.

All in all, this book is a fantastic addition to the growing library of Star Trek books and novels and even makes the already memorable character and somehow manages to make him feel more human without losing any of the mystique that came with him.

An essential purchase for any Star Trek fans out there.