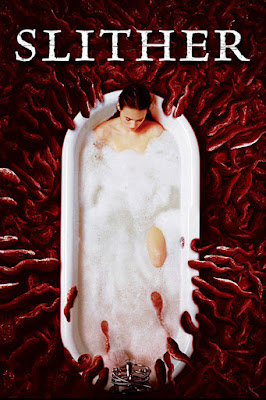 Written and Directed By
James Gunn

What has got into you? An invasion of slithery slug-like parasites from outer space arriving via meteorite in the redneck town of Wheelsy, South Carolina, where they turn most of the local yokels into flesh-eating zombies...

Having written for the jubilant trash-mongers at Troma Films before scripting 2004's well-received remake of Dawn Of The Dead, writer-director James Gunn crafted this hilarious splatter-fest as an homage to the comically violent horror films of the 1970s and 1980s, and he gets it just right with a low-budget look, perfect casting, grisly make-up effects and judicious use of CGI gore.

With laughs and gross-outs aplenty, Slither is the best horror comedy since Shaun Of The Dead!

As a massive fan of Nathan Fillion and of crazy, low budget horror movies, the idea of combining the two was too good to pass up on.  Add in the director of Super and of Guardians of the Galaxy and I went in to this one with a very high set of hopes.

The thing that struck  me the most was the feel of the movie.  Not only did it look like it could have easily have fitted in with the low budget movies of the 70's and 80's or feel like it has come from the Troma studio that brought us movies such as The Toxic Avenger.

Story wise, the movie does a great job of mixing comedy with gore and the pacing of the writing really means that the movie feels a lot shorter than it actually is.  A lot of that is down to the simple fact that Gunn really knows how to ramp up the tension while still slipping in a lot of dark humour.

However good the story is, and here it is really good and gripping, it would be flat if the cast didn't make the characters come to life.  As always, Nathan Fillion brings a goofy yet endearing charm to the part of Bill Pardy and, for the most part, it is definitely his show.  I loved the simple fact that his hero wasn't the sort of hero that would get everything right.  In fact, it was quite the opposite.  The things he did manage to get right, he got right by fluke or accident.  I loved that and it really added a great sense of comedy to the movie itself.

That said, the rest of the cast aren't exactly just eye candy either.  Michael Rooker looks like he's having the time of his life hamming it up as Grant Grant alongside Elizabeth Banks as his young wife Starla.

Gore and effects wise, the movie really does make absolutely superb use of its budget and looks positively brilliant, especially with the creature designs as Grant Grant is transforming.

For all you movie buffs out there, there are loads of little nods and 'Easter eggs' to find that give sly and knowing winks to other movies.  There is also a cameo from Gunn himself as well as the legend that is known as Lloyd Kaufman so keep an eye out for that!

All in all, this is one of the funniest horror / comedy mash up's that I have seen in a very long time.  It's true that it doesn't match the quality of Shaun of the Dead but I would be loathe to compare the two as they take vastly different approaches to their respective stories.  Definitely one well worth picking up, especially if you are a Nathan Fillion fan as he is in top form for this one.

Posted by Pat Scattergood at 11:04