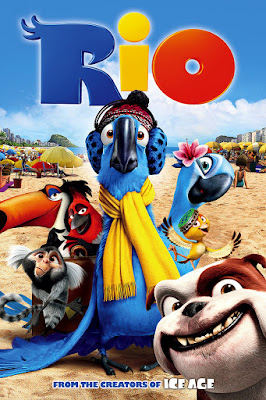 When Blu, a domesticated macaw from small-town Minnesota, meets the fiercely independent Jewel, he takes off on an adventure to Rio de Janeiro with the bird of his dreams.

I have to admit that I have always had a bit of a soft spot for movies with talking and singing animals in ever since I was a child and now that I have a little one of my own, it's fabulous to see him taking such joy from those kinds of movies too.

He was recently bought Rio as a gift and I'd heard some very good things about the movie so we stuck it straight on to see if it would live up to those great reviews.

The first thing that struck me about Rio was the simple fact that it looked absolutely stunning in every frame.  The animation is clear, colourful and crisp and that really brings the vivid life of Rio and of the carnival season to live in a big and incredibly fun way.

It's the same with the characters themselves.  Their animation is a delight to watch.  The facial expressions, their movement, everything just looked gorgeous.

The story itself, while not exactly breaking new ground in the originality stakes, does come across as quite sweet yet exciting and fun.  That and the stunning looks of the movie really kept my little lad hooked to the entire movie and he loved rooting for the various characters.

My one problem with the movie is that while it was stunning to look at, the movie didn't have a whole load of character development to it and that led them to feeling a little bit stereotypical and a bit stale,  That's a shame because the rest of the movie itself is fun and feels so alive.

That said, this movie really does have a great cast, especially with Eisenberg as Blu.  He really did sound like he was having a lot of fun with the dialogue and really did put his own spin on the character but I just wish the writing had have given him a little more to work with.  It was the same with Hathaway as Jewel, she did a good job of making her the companion of Blu and the two voices worked really well together.  Personally, for me, the highlight was definitely Clement as the evil Nigel.  His performance had me in hysterics more than once.

All in all, this movie does suffer a little bit from being style over substance but with that said, it was still very entertaining, gorgeous to look at and kept my little lad entertained so you can't ask for more than that with an animated movie really.

Posted by Pat Scattergood at 23:55