Buffy The Vampire Slayer: Demons of the Hellmouth - A Guide for Slayers Review 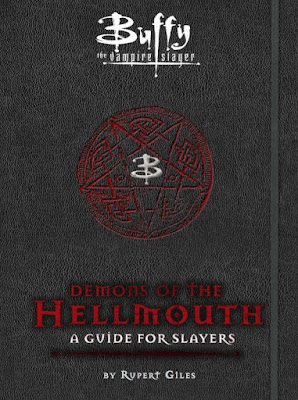 
After the fall of the Watcher's Council, and the defeat of The First, Rupert Giles was determined to use experiences from his seven years in Sunnydale to educate the New Slayers.

He pulled together various notes and papers, including excerpts from his Watcher's Diary, to form a new handbook and field guide: Demons of the Hellmouth.

This is Giles's original copy and contains pages annotated by Buffy, Faith, Willow and Xander.  It has passed through many hands since the Battle of the Hellmouth.  And now, Slayer, you hold it in yours.  Are you ready to be strong?

With a foreword by actor Anthony Stewart Head, and written by award-winning Buffy expert Nancy Holder, Demons of the Hellmouth is the definitive in-world guide to the vampires, demons, and Big Bads from the cult TV series.


As a fan of the Buffy the Vampire Slayer series, although I will readily admit that I was always a little bit more of an Angel fan, I have read a great number of some really impressive tie in books for the show.  A lot of them really capture the feel of the characters, the settings of the show and even the feel of the stories that we have all seen and loved.

With this, a handy guide written by Giles himself, I was wondering where they would be able to cover new ground without telling the fans a myriad of things that they have already been told countless times before.

Well, the first thing that I noticed about this edition is that is absolutely beautiful.  It really does look like a book that would have been in the Sunnydale library itself.  That is massively helped by the layout of the book itself,  I loved how the different sections all flowed nicely and really came across as having truly been from the mind of the popular character from the show itself.

This book kind of had a bit of a weird feeling for me.  I was correct in my feelings of whether or not they would manage to cover any new ground for the fans.  They didn't at all yet that also manages to be one of the strongest parts of the book.  It almost felt like putting on an old pair of slippers and just letting the comfort wash over you.

One of the things that I liked the most about this book, as a fan, were some of the in jokes and little comments that were dotted throughout the book.  Not all of the them were 100% successful, in fact a couple felt a little out of character for the people that were meant to have written them, but they really did give this fan a nice sense of nostalgia for a very popular television show.

The fact that it does so much for the fans out there could be one of it's weaknesses too.  If you're not a fan of the show then this isn't really the book for you.  You won't find a lot of stuff in here to grip you or make you want to begin to watch the show itself.  However, if you are a fan then you will love just how familiar this book is and is a great way to revisit those old, familiar and well loved characters.