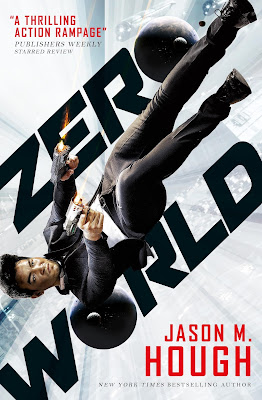 
In the near future, technologically enhanced superspy Peter Caswell is dispatched on a top-secret assignment unlike any he's ever faced.  A spacecraft that vanished years ago has been found, along with the bodies of its murdered crew - save one.

Peter's mission to find the missing crew member, who fled through what appears to be a tear in the very fabric of space.

Through this mysterious wormhole lies an even more confounding reality: a world that seems to be Earth's twin.

Jason M. Hough is known to the visitors of this site for his series of novels in the Dire Earth trilogy.  While I loved the series itself, I felt it went a little bit disjointed in places but that said, it was a well paced and interesting series.


Here he returns with a spy thriller mixed up with a space traveling science fiction story and what a mix it is.  It feels kind of like a James Bond or a Jason Bourne thriller with a science fiction element and enough twists and turns to make James Patterson blush.

The story itself feels like one that you will pick up and not want to put down at all.  The mixture of an old school style spy story with the idea of someone being 'enhanced' is one that would sometimes come across as a little bit cheesy but here, Hough's writing gives it such an assured edge that it comes across as completely gripping.  The pacing is well thought out and the twists spread out so well that you can't help but go for 'just one more page'.

I really liked the variety of characters in this one.  I loved how the characters weren't paper thin and had reasons for all of their actions.  The best of these lay with the main character of Caswell himself.  I loved the way the story dealt with the idea of accountability in that Caswell had none because he could forget everything he had done at the end of each mission.  What would that do to a person?  How would it affect their mental health?  The story itself left the reader with some fantastic questions to think over about some of the characters and the twists itself.

For the action fans out there, the sheer body count and scenes of violence are often shocking and bloody.  The scenes don't glorify the violence itself, instead it treats it like a means to end almost.  I liked that about the story because some spy thrillers tend to try to make the violence and fight scenes feel 'cool' and 'different' and that can sometimes come across at the expense of the story itself but that's definitely not the case here.

All in all, I absolutely loved this new novel from Hough.  The twists and turns were well thought out and some were even quite shocking in their execution.  If you are either a spy novel fan or a big science fiction fan then this book does a fabulous job of mixing the two without it feeling disjointed or too busy.  Well worth picking up.