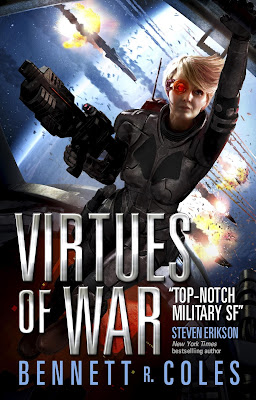 
The Terran military, the Astral Force, launches a mission to crush a colonial rebellion on the Centauri colony. Although Expeditionary Force 15 succeeds, the surviving veterans remain scarred —physically and emotionally, and the consequences of their actions follow them back to Earth when terrorists seek to exact catastrophic revenge.

Lieutenant Katja Emmes is a platoon commander, leader of the 10-trooper strike team aboard the fast-attack craft Rapier. Although fully trained, she has never led troops in real operations before, and lives in the shadow of her war-hero father.
Sublieutenant Jack Mallory is fresh out of pilot school, daydreaming about a fighter pilot position in the space fleet. He is in for a rude awakening.

Lieutenant Commander Thomas Kane uses a six-month deployment in command of Rapier is to secure his rise to stardom within the Astral Force. He also plays the subtle politics of the military.

After reading this one, I was both impressed and a little disappointed.

One of the things that struck me was the fact that despite it being quite a long book, there didn't seem to be a whole load of character development here.  That's a bit of a shame because of the simple fact that just when you would start to get interested in a character, they would either disappear in to the shadows and barely get mentioned again or they would be killed off.

The main strength of the book is by far the sheer amount of detail and effort that Coles has put in to the technical side of things here.  For a science fiction nerd such as myself, I really appreciated that part of the book and it's one of the strongest parts of the entire novel.

There are some really well paced and thought out twists as well as some cinematic battle sequences, although those felt a little bit too busy at times.  I think that because of the volume of the battle and action sequences, the book would have benefited from a little bit more detail there because of the simple fact that there were a couple of moments where they all seemed to blend in to one.  Some of that was down to the fact that some of the ships felt a little nondescript and it was the same with some of the planets.  That said however, these moments did their job in that they created an exciting and sometimes claustrophobic atmosphere.

Overall, with this apparently being the first in a trilogy of books, this felt almost like an opening for the series and not an actual novel.  That may sound strange considering the length of the book but it truly did feel almost like it was there as a way of setting things up for the following two books.  That was a little disappointing in that there is a lot here for the science fiction fans and it had enough of a spark to make me want to get to the second book.