For Those Who Fell Review 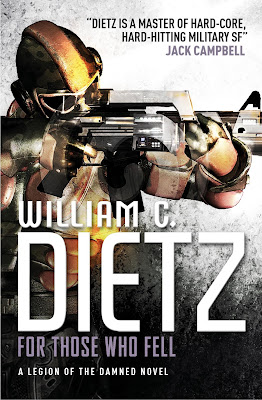 The ice planet Algeron may be cold, but it offers an oasis of safety for the Confederacy at a time of shifting alliances and conflict in the galaxy.  The natives, however, are not so happy about the Confederation's presence on their planet, for this brings the threat of the dreaded Ramanthians to their doorstep.

Meanwhile, General Booly has received news that will change everything; at the heart of a Ramanthian fortress lies the key to a game-changing interstellar communication technology.  The military importance of stealing this technology is immediately obvious, as well as the ideal man who is fit to lead the Legion of the Damned on this vital mission: Lieutenant Santana.

This is being the sixth entry in to the Legion of the Damned series, you would think that the quality would start to dip by now.  However, with this being written by the incredibly talented William C. Dietz, that is quite simply not the case.

It is true that the series has had a couple of books that were better than the others but with the quality being so high anyway, this series has always maintained a rather strong sense of quality with its various stories.

Here Dietz has crafted an intelligently paced and well thought out story.  One of the things that struck me the most about this installment is that this novel works on quite a few levels.  It is true that you will get more entertainment from the story if you are at least familiar with the previous installments but the really interesting thing about this one is that a newcomer can also pick this one up.

The idea behind the story being one of a quest to get some technology to turn the tide of the war isn't that new an idea in the science fiction genre, Dietz writes it in such a way that it feels completely absorbing.  The story really has a way of dragging you in to it that it feels like you are watching it unfold before your very eyes.  One of the things that has always been a strength of the series are the action sequences that have an almost film like quality to them and that's the same here.

Another strength of the story is the simple fact that, with the same as the other installments, the story never sticks to one side.  You get the entire story from both sides, especially in the battle scenes, and even shows how they improvise when their plans go wrong.

Some of the characters here do feel a little bit like they are there to be cannon fodder but with the main characters, we get some great character development here.  It's always been a strength of the series that you feel like you are involved in the characters live and have watched them grow as the series has progressed.

If you are a fan of the Legion of the Damned series then this is yet another quality addition to the series and one that is well worth adding to you ever growing collection.  If you have never read one of Dietz's novels then this one more than stands up on it's own.

Email ThisBlogThis!Share to TwitterShare to FacebookShare to Pinterest
Labels: Book, For Those Who Fell, Legion of the Damned, Science Fiction, Titan Books, William C. Dietz