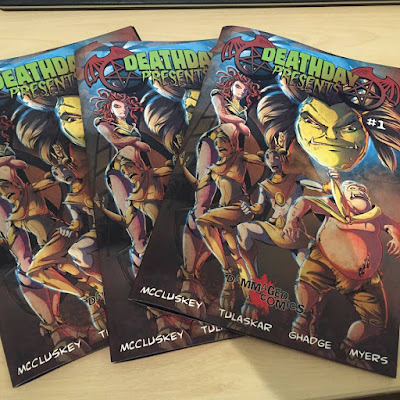 
Did you know that each year Satan celebrates his deathday?

And did you know that each and every demon living, in the bowels of Hell has to bring him a present...a good present?

Now they face a race against time to get 'topside' to appease Satan and bring him his...


David McCluskey is a name that regular visitors to this blog should be very familiar with.  His work treads a fine line between horror and comedy, although his recent release Doppleganger was a much darker and horrific affair, and that works very well with his wry and cynically sarcastic humour.

Here in Deathday Presents McCluskey has crafted a very funny tale that feels a bit like a comedy horror as if it had been written by an almost more sarcastic Monty Python team.

The story itself moves along at a great pace and really flings the jokes out at a very rapid pace.  I have to admit that not all at knee slapping gaffaw inducing gags but I had a big smile on my face while reading this one and that's exactly what it set out to do.  I loved the idea of taking the often used 'forgotten gift' idea but turned it on its head by setting it in Hell and using a slight hint of horror as well.  It felt almost like the feel that the movie Little Nicky would have had if the movie had been a lot funnier than it ended up being.

Character wise, we're not told too much about the main trio of demons here but there's enough to want to get to the next issue and see where they are going to take this mission of trying to find Satan a suitable gift.  I did like the interaction between the main characters and some of the more background related ones because it showed that there are some relationships there that would be interesting to explore so I'm hoping that McCluskey will pick up on those in future issues.

Art wise, I loved it.  The creative team here hit a home run with the mixture of a sometimes near cartoon look but had a lot of horror story nods added in to the background and more.  The subtle little things in the backgrounds and the character mannerisms were very nice touches indeed and that did a lot to make the story and characters really feel memorable.  Each character felt unique and showed their personalities very well, especially in the later pages.  Definitely a creative team there to keep an eye on.

All in all, this is a great addition to the comedy horror genre.  The jokes were well placed, there were memorable characters and some brilliant and subtle nods to the horror genre were very much appreciated by this long term horror fan.  Definitely a title well worth picking up if you're in the need for a chuckle or ten.