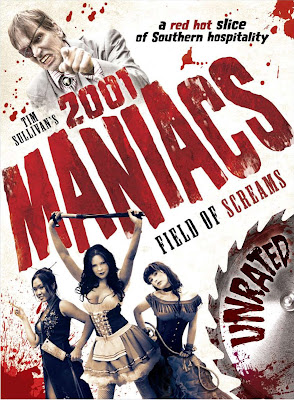 
When this year's round of unsuspecting Northerners fail to show up for their annual Guts N' Glory Jamboree, the residents of Pleasant Valley take their cannibalistic carnival on the road and head to Iowa where they encounter spoiled heiresses Rome & Tina Sheraton and the cast and crew of their "Road Rascals" reality show.

As a remake of Two Thousand Maniacs, the remake 2001 Maniacs starring Robert Englund was a great slice of completely over the top and politically incorrect fun.  In fact, it was a great throw back to the 1970's and 1980's slasher movies.

Fast forward to 2010 and there's a sequel that was written and directed by the same folks.  Personally I didn't know that this one even existed yet I was excited to check this one out despite the knowledge that Englund himself hadn't returned.

After watching this one, I have to admit that I kind of wish I hadn't discovered it existed.  I'm pretty easy going with my horror movies but this one has got to honestly be one of the worst ones that I have seen in a very long time.

For a start, the setting for the movie just appeared to be an empty field with some cheap looking tents.  Because of that, there never seemed to be that much of a sense of danger despite the simple fact that they were getting picked off one by one.

Talking of getting picked off, despite this being a 'harder cut' of the movie, the blood and gore that horror fans love so much is very sparingly used here.  Granted, I honestly don't think that would have saved this movie.

Story wise, it seems almost like this movie was stuck in a bit of a time warp.  Using the idea of making a reality show in the same vein as the God awful 'The Simple Life' with Paris Hilton in, to spur the movie on just didn't work for me.  If you are going to use a show as something to parody then you should first make it a funny one and secondly make it one that wouldn't make the movie feel so obviously dated.

One of the things that bugged me the most was the simple fact that a lot of the characters were so badly acted that they didn't even portray the fact that they were in danger all that well.  In some scenes, they weren't even running away when given the chance to escape!

Talking of the awful acting, I was surprised to find people such as Bill Moseley and Lin Shaye in this one.  Both are absolutely fantastic actors and truly deserve to be in much better movies than this one.  Moseley does such a great job as the Mayor that you almost forgot that Englund hadn't returned and Shaye is, as always, her normal bonkers self.  It was these two performances that were the only reason I actually managed to slog through to the end of the movie itself.

All in all, if you are a fan of the original movie or the Robert Englund fronted remake then I would strongly avoid this one.  It felt a hell of a lot longer than it actually was and didn't even manage to be one of those 'so bad it's fun to watch' type movies that I love so much.

Posted by Pat Scattergood at 13:57