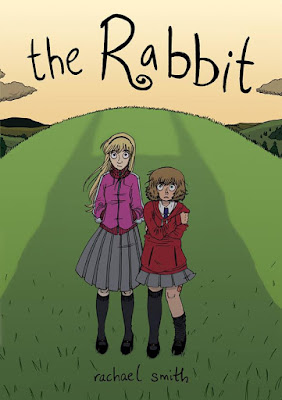 Written and Illustrated By
Rachael Smith

Eleanor and her younger sister, Kathy, have ran away from school, from home and from all of their troubles.  They may also be running from reality itself, as they seem to have acquired a new friend in the form of a talking cartoon bunny rabbit called Craig.

As Craig grows bigger and bigger, the girls soon discover exactly what kind of creature has joined them on their adventure.  Running away is not as easy as it seems.

Rachael Smith's follow up to the acclaimed House Party is a surreal and affecting coming-of-age tale that captures the wonder and vulnerability of youth.  Both funny and sinister, familiar yet fantastical, you won't soon forget The Rabbit.


Rachael Smith is a writer and artist that I am a very big fan of.  Her wonderfully surreal yet down to Earth style coupled with her bright and playful art style always seems to hook me in and give me an enjoyable and heartfelt story.

With The Rabbit, I have to admit that I am not all that sure as to how to explain it without giving loads of the story away but here's my best shot.

A lot of this is down to the simple fact that despite there being some rather fantastical moments in the story itself, the story was kept rather subtle for most of the release and that helped some of the 'louder' moments have a lot more impact.  The almost lyrical flow of the story itself really gave it a great pace and feel that really had me wanting to turn page after page to see what was going to happen next.

Another thing that I liked was the simple fact that the relationship between the sisters is so well written that you almost feel like you know the pair of them yourself.  It's both funny yet sweet and realistic at the same time.  You really do end up feeling like they are real life sisters and that's thanks to the superb writing by Smith.

If you have read any of Rachael Smith's work before, you will be very familiar with the colourful and fun artwork that populates her work and that is definitely here in this one.  Thanks to the story alternating between the real world and a world that you're not sure if certain characters exist or not, the story works superbly well and it really brings the fantastical tale to life in a bold and exciting way.

I must admit that before I read this one, I was a little unsure if it would match the superb heights of her previous stories but not only did it do that, it surpassed them in a big way.  I really felt like this was a bit of a new direction for her work and each work that she has released has really shown a growth in her craft so this is by far, the best one she has done yet and I can't recommend it high enough.

Pre-Orders will be available from the beginning of August from Avery Hill Publishing
Posted by Pat Scattergood at 15:12