The Cat With a Really Big Head Review 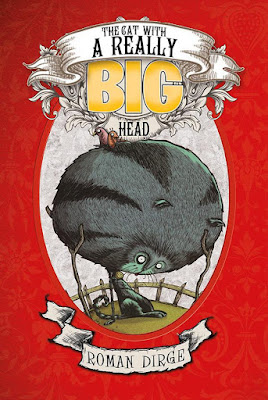 Written and Illustrated By
Roman Dirge


From the ridiculously silly and twisted imagination of Roman Dirge comes the story of a cat called Cat and his stupidly ridiculous big-head and a tale of what really happens deep inside your body when true love ups and dies.

This collection of two of Roman's strangest and weirdest tales will take you from the bottom of a cat bowl to the very heart of human despair!


The thing that I have always liked about the Lenore series of stories is that while there is a macabre sense of humour running through them, there's always a really strong emotional core there too that makes you really care about the characters.

On the other side of things, I've not really read a whole lot of Dirge's other work so when I was offered the chance to read this one, I have to admit that I absolutely jumped at the chance to take a look.


With a title like The Cat with a Really Big Head, you kind of already know what you are in for from Dirge,  A tale that has a Tim Burton style sense of the macabre while still hooking you in emotionally and this collection does exactly that.

With the first tale, The Cat With a Really Big Head, the style that Dirge is known for is definitely there in spades.  The story itself flows with a great sense of pace and charm.  There are moments that you find yourself laughing yourself raw but then all of a sudden find yourself feeling really sorry for the character.  That shows a real sense of quality to Dirge's writing and it really shows here that Dirge is definitely one to know how to craft a quality story.


The second tale in the collection is called A Big Question and has a really dark sense of humour to it.  If you like the Lenore stories then you'll like that one.  It's the sort of story that wouldn't have been out of place appearing in Beetlejuice or another such movie.

That's then followed up with The Monsters in my Tummy.  Now this one is an absolute heart breaker of a story.  According to the foreword, it is based on a break that Dirge had at the time and that really shows through the writing.  You can almost feel the raw emotions of it all flying off of the page at the reader.  The art really does go hand in hand with this one too and does an utterly brilliant job of making the story come to life.

All in all, this is a fantastic and heart felt collection.  The stories here really do show Dirge at his best and if I'm honest, he's one of the few people in the comic book world that you know you can count on to deliver a quality release and this is just another one in his long line of titles.