The Affinity Bridge: A Newbury and Hobbes Investigation Review 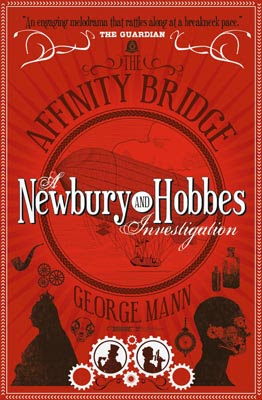 
Welcome to the bizarre and dangerous world of Victorian London, a city teetering on the edge of revolution.  Astounding new technologies abound; airships soar over the capital, trains rumble through the streets, and clockwork automatons carry out menial tasks.  But beneath this dazzling veneer lurks a sinister world.

Ghostly policemen haunt the alleyways of Whitechapel, cadavers rise from the dead, and now an airship has crashed under strange circumstances.

Mystified by a series of grisly murders, Scotland Yard call upon the brilliant Sir Maurice Newbury, Gentleman Investigator for the Crown, and his recently appointed and unflappable assistant Miss Veronica Hobbes.

So begins the first thrilling adventure of Newbury and Hobbes, in a steampunk London that you will never forget.


As a big Newbury and Hobbes fan, and that of George Mann's writing itself, Titan Books releasing the newer books in the series has been a massive plus for me.  When they announced they were going to re-release the first books too, I have to admit that I was excited to see them revisiting the stories that made the pair of investigators so popular.

I must admit that it had been a bit of a while since I had read the first novel so to revisit this new edition from Titan Books was a real treat for me, especially after having such high hopes for it.  There is sometimes the flaw of reading a book and then not revisiting it for a long for the reader to then view it with rose tinted glasses.  With this one that wasn't the case.

Mann has a reputation of writing exciting stories with such fully fleshed out characters that you find yourself caring about each and every thing that happens to them during the story.  That is the case here.  Even with their early selves, the characters of Newbury and Hobbes are here in all their popular glory and they leap off of the page in such a way that you almost feel like you know them personally.  It's not wonder that Mann's characters are so well respected when they feel this realistic.

The story itself is very well paced and written.  If you have ever read a George Mann book before then you know exactly what you are in for.  There are some absolutely brilliantly thrilling action sequences in here that manage to both excite you but also doesn't take away from the almost subtle nature of their investigation.  I loved the fact that you had all the grisly murders and almost supernatural feel of the crimes going on around them but the writing still managed all of that in a subtle and sometimes quiet nature.

The world of steampunk novels is started to feel rather crowded at the moment but with books like this one coming out and being revisited, the old saying of the cream rising to the top is definitely true and that is the case with the work released by George Mann.  I, for one, can't wait for more adventures from the team of Newbury and Hobbes and nor should you.