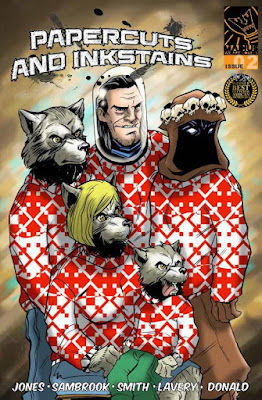 
Join the second book in the Papercuts and Inkstains series as an investigative space explorer as he plunges deep into a derelict planetary colony.  Jeff's bad day is about to get a whole lot worse as he struggles with everyday mundanity, otherwordly interventions and ungodly body hair then finally those brothers of B.O.O.B.D.A.E.are back as they deal with bringing forth the instrument of the apocalypse in the only way they know how...badly...and with a lot of faffing about.

With the sheer amount of fun that I had with the first installment of Papercuts and Inkstains, I was really looking forward to the next one so when I had the chance to read one for this site, I jumped at the chance.

With Robin Jones having won Best Letterer at the Ashcan Awards, there was quite a large amount of expectation that came with this issue and when I started to read this one, I couldn't help but think that this would more than live up to the high standard set by the first issue.

The issue starts with a science fiction story called Cast Adrift and it really brought forth the feeling of dread and wonder that I got while watching the Alien movies for the first time.  The deliberate pacing of the story really gave it a chance to grow and to get the reader hooked.  The twist at the end was delivered in such a way that while it wasn't the biggest shock in the world, the writing made it seem like a big deal.

With the first story giving the issue a superb and quite creepy feel, I was wondering where the Madius team would take the style next.  Well, they took it in a horror feel but with a great comedy slant that made me think of The 'burbs but with a darker feel.  I also loved the Jeff Goldblum references.  I won't list them all here but believe me, they are definitely worth reading.

This installment ends with the return of the brothers of B.O.O.B.D.A.E and their misadventures continue in a wonderfully funny way.  There are some instantly quotable moments as well and I, for one, hope that they will be making another appearance in issue three.

The art here is very varied and really does well to fit in each respective story.  The best is by far the art for Cast Adrift because it really gives that story a classic science fiction feel but without feeling at all cliched.

All in all, this is a brilliant follow up issue to the fantastic first installment but it does lead to one question.  How are they going to top this one?