Inside Out / Lava Review 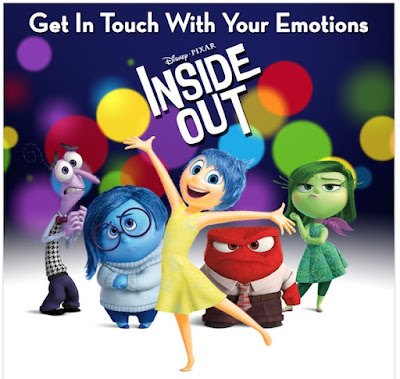 
A story that takes place over millions of years and is inspired by the beauty of tropical islands and the allure of ocean volcanoes.

After young Riley is uprooted from her Midwest life and moved to San Francisco, her emotions - Joy, Fear, Anger, Disgust and Sadness - conflict on how best to navigate a new city, house, and school.

When I went to see the movie Inside Out with my little lad, I was pleased to see that they were going to precede it with another one of their gorgeous shorts,

This one tells the story of two volcanoes that just want to be in love and not alone anymore but it's told mainly in song and that idea really interested me.

For such a short run time of around 7 minutes, Lava really did manage to pack a whole load of emotion and beauty in.  I'm not ashamed to admit that this beautiful short really made me well up and is definitely one of the best shorts that I have seen in a long time.

There was a whole load of hype surrounding this movie on it's release with many people saying that it is the best release that has ever come from those guys and girls from Pixar.

Well, after seeing it, I have to admit that it is most definitely up there with the best of them.

The idea of a story told from the point of view of the feelings in a young girls head really sounded interesting but for me, the trailer for the movie didn't do the idea justice.  Instead, I was expecting a movie that was more slapstick comedy than the one that was on the screen.

Inside Out does have some really funny moments.  In fact, the whole movie is a sheer roller coaster of a movie.  There are moments where the movie will make you laugh until you cry but will also make you cry out of sheer sadness.  That is one of the main strengths of the movie in fact.  The writing really does a superb job of showing just how mixed up and complicated emotions can be in real life.

I've seen quite a few reviews saying that this is a rather dark and depressing film for children but personally, I don't see it.  The movie does deal with some heavy themes but does so with a quite gentle hand.  I'll admit that I did have to explain a couple of little bits to my little lad, who is six, but it was nice to sit with him and see a movie that showed him that it's fine to feel sad, it's fine to feel happiness and the such.  He was glued to the screen and really seemed to enjoy the movie and it was nice to see his emotions go up and down a little with the movie because of how into it he was.

The voice cast do a brilliant job of bringing the characters to life.  Amy Poehler, who I'm not a massive fan of, is absolutely spot on as the character of Joy.  Her almost childlike sense of wonder was adorable and really did feel like the linchpin of the movie itself.

There's a really beautiful scene in the movie involving the imaginary friend named Bing Bong that had both myself and my little lad crying yet willing them on as well.  There's also a nice twist in the end as to which character is going to save the day and I felt that was a very nice touch from the writing team.

All in all, while I can understand some of the complaints about the movie, I really do agree that it's one of the best and most emotionally beautiful movie that Pixar have made in years.

Definitely one to see,

Posted by Pat Scattergood at 13:38