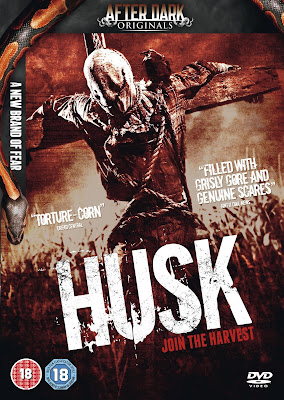 Written and Directed By
Brett Simmons

An After Dark Films Movie


A group of friends stranded near a desolate cornfield find shelter in an old farmhouse, though they soon discover the dwelling is the center of a supernatural ritual.

As regular visitors to this site know, I sure do love my horror movies.  I don't mind if they're big budget or no budget as long as they keep my interest.

I'd heard a lot of very bad things about this movie and, to be honest, it had kind of put the movie out of my mind.  That's when I saw it going for next to nothing in a shop and decided to pick up a copy to see if it truly was as bad as it had been made out to be.

After watching Husk, the thing that struck me was the simple fact that I couldn't see why it had gotten so much bile thrown towards it upon release.  I'll admit that while it's not exactly the most original horror movie that I have ever seen, it is one that is very well made considering the fact that you can see it had a much smaller budget than some of the other movies in this genre.

The thing that I liked the most was the feeling of dread that ran through the entire movie.  Even with characters that kind of merged together, the story itself was an interesting one and one that was shot well and with style.  There were some fantastic moments where the tension was built up superbly well and the effects were used to their utmost effectiveness.

Whenever the scarecrow's would appear on screen, the movie would use a lot of great angles and used the settings as if they were another character in the film.  That, for me, really raised the quality of the movie much higher than other, similar movies.

As horror fans, I know a lot of you will want to know about the deaths and the gore.  Here the deaths themselves are done well and do create some very effective 'jump' scares for the viewer.  Some of the deaths do look very well done with the effects used and I'm a big fan of using as many practical effects in a movie as possible and they do that with style here.

Personally, while Husk isn't the most original thing that I have ever seen in the horror genre, it's a well shot and well paced movie that has a great, grimy feel to it all.  There are a few plot holes here and there but for the most part, I enjoyed it for what it was.  A chilling and effective horror movie so if you get the chance to pick it up then do.