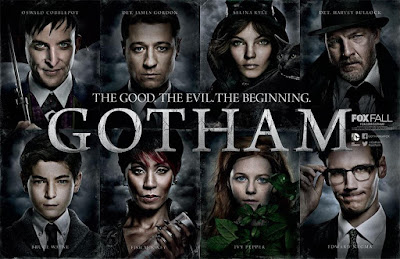 Based on Characters Created By
DC Entertainment


The story behind Commissioner James Gordon's rise to prominence in Gotham City in the years before Batman's arrival.

When it was announced that there was going to be a television series exploring the world of Gotham City before Batman, I have to admit that I wasn't all that sure that it was needed at all.

After watching through season one, I have to admit that there are some absolutely brilliant ideas here and there were also some brilliant appearances from some of the best characters in the rogues gallery for one of the worlds most iconic superhero characters.  That said, the execution of it all seemed a little off for me.

Stories wise, the whole season seemed a little bit like it couldn't really make up it's mind as to which tone to take.  Some had a rather macabre sense of humour to them and others were dead serious detective stories.  That lead to some of the episodes really clashing styles wise and for me, as the viewer, it took me out of the season at times.

The season was at it's best when it was just being a straight up, very dark detective story but with the added hints at who the characters were becoming.  Those little hints and nods were very well done and I especially liked Victor Zsasz being utterly insane yet with a quiet sense of intelligence to him.

Characters wise, they were very well done.  I loved the growing resentment of James Gordon at the world crumbling around him.  I loved the evolution of  the Selina Kyle character and watching that of Oswald Cobblepot trying to put all the pieces in place to rise to power.  There were times where the series felt more like it was the 'Cobblepot Show' and not about Gotham itself but with a performance as strong as the one that Robin Lord Taylor gave, it made that part of the story very gripping.

For me, the highlight was Sean Pertwee as Alfred Pennyworth.  I've always thought that Pertwee was a massively underrated actor and here he gives the character of Alfred a sense of strength yet also makes him in to a very sympathetic character as well.  I loved that they hinted at a darker past for the character but left it to the viewers imagination instead of having to spell it all out.

However, for me, the weakest link was that of the Fish Mooney character.  There were some brilliant moments where she came across as menacing and dangerous but then times where she came across as an almost comical version of the character and that lead me to not being able to take the character seriously, which hurt the ending parts of the season massively because it had gotten to the point where I wasn't all that bothered about what was going to happen to her character next.

All in all, I was a little disappointed with this series.  There were some absolutely brilliant moments that really gripped and hooked me in but then they would follow it up with an episode that would feel so confused as to whether it wanted to be funny or dead serious and that would destroy the momentum that series had built up.  That confused style took away the 'what would happen next' feeling that I love my shows to have and that meant that I did have the urge to watch episode after episode.

That said, the quality of the episodes that were very well done were done so to such a degree that I'm still looking forward to seeing where season two is going to take these characters next but I'm still hoping that they will manage to pick a style and try to at least stick to it.