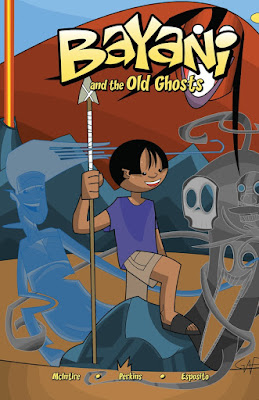 Art and Cover By
Grant Perkins


Bayani, a boy of 11, is desperately trying to care for his sick father (a fisherman) and keep food on the table for his small family. Unfortunately, the sun has been shining down on the islands for the last month and night refuses to fall.

The land is growing parched from the constant heat and the fish are moving further and further away from shore. During this disaster, the rain god, Pati', recruits Bayani to undertake a quest rescuing the nine kidnapped daughters of Lady Moon from the horrible monsters of lore. Bayani embarks on a great adventure with his friend, Tala, and using their wits, the kids defeat one hideous creature after another in their quest to rescue each of the Moon's daughters.

I've always been a fan of comic books that are full of adventure, magic and mystery.  Considering there aren't all that many of these sorts of comics that are suitable for younger children, when this one popped up then I knew it was going to be worth picking up.

With a name like Travis McIntire at the helm writing wise, you know what you are going to get with this story.  Great pacing, humor and a lot of excitement and this one has it in spades.  In fact, there's a real sense of fun that runs throughout this first issue and really does a great job of setting the scene for the issues to come.

One of the things that I really liked about the story was the simple fact that while it is set up for children of all ages, there is a lot here that would entertain even the most ardent of adventure fans raised on the likes of Indiana Jones and The Goonies.

Art wise, it really does a good job of carrying the sense of fun and adventure that the writing sets up.  In fact, I would even say that the art has a real feel of a Saturday morning cartoon in the best possible way.  The bright and colorful nature of the art really brings the story to life in a big way and even feels both unique yet familiar at the same time.

I must admit that this isn't the sort of comic that I would have associated with Caliber Comics at all.  I'm used to their older releases being much harder and more mature in their approach but with this one, it really does to show that that doesn't have to be the case here.  This is definitely the sort of comic that you can not only read yourself but can also read with your little ones.

All in all, this is a title to keep your eyes on.  It's fun, adventurous and well paced so add it to your collection.

To check out their Kickstarter campaign then click here!
Posted by Pat Scattergood at 14:18