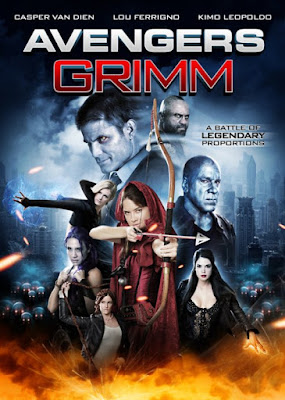 
When Rumpelstiltskin destroys the Magic Mirror and escapes to the modern world, the four princesses of "Once Upon a Time"-Cinderella, Sleeping Beauty, Snow White, and Rapunzel-are sucked through the portal too. Well-trained and endowed with magical powers, the four women must fight Rumpelstiltskin and his army of thralls before he enslaves everyone on Earth.

The Asylum are like the Marmite of the movie world.  You either love them or you hate them.  Personally, some of their movies are in the 'so bad they're entertaining' camp so sometimes I just stick one on and have a bit of a giggle.  Other times, their movies are so bad that you can't get all the way through them but which side of the fence would this one fall in to?

Well, with a premise that combines that of being a superhero team, much like Marvel's The Avengers, and combining it with being fairytale characters, I went in to this one with admittedly low hopes but with my interest high.  I mean, surely it will at least be watchable and fun with a story like that.

After watching it, I have to admit that it's not one of those Asylum movies that falls in to the 'so bad it's good' camps.

Don't get me wrong, there are some really good moments.  I especially liked Elizabeth Peterson as Red, who came across as being supremely confident in the role.  Casper Van Dien did a relatively good good as Rumpelstiltskin too.  The addition of the original Hulk, Lou Ferrigno, was a nice touch, even if the make up job did make him look like Dr Freeze and Colossus had a love child.

The rest of the cast looked utterly bored for the majority of the movie and that lead to some of the dialogue, admittedly already quite high on the cheese quota, coming across as quite flat and life less.  In fact, some of the delivery came across as either the actor or actress being bored or downright confused by what they were meant to be saying.

With a movie that promises magic and loads of battle scenes, there would need to be someone that was capable of using their rather low budget in an effective manner and for the most part, those effects did their part.  There were a few moments where they did look a little rushed and unfinished but for the budget that the team had, they weren't the worst I've ever seen in an Asylum movie and that's saying something.

If you can look past the flaws, the dead acting and some of the most obvious continuity errors I've seen in a long time, especially when Red's stunt double is a good foot taller than the actual actress, then you might enjoy this one.  It had an interesting idea but the execution of it sadly felt lacking and didn't even venture in to the 'so bad it's fun' category that I mentioned earlier.

Definitely one I won't be rushing to watch again any time soon.

Posted by Pat Scattergood at 23:54