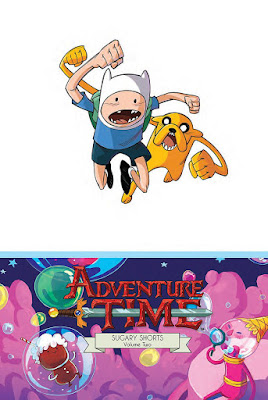 Collecting stories by amazing comic creators from around the world, SUGARY SHORTS volume two stars all your favorite characters from Marceline the Vampire Queen to Cinnemon Bun illustrated in a variety of wildly different styles.

This all-too-sweet collection contains so much sugary goodness it's almost too delicious to handle.


As a big fan of the Adventure Time television series, there have been some great tie-in titles coming from the folks over at Titan Comics.

With so many stories in this collection, 18 in total, the length of the stories can range from 2 pages to 8 and really feel as varied as they could possibly be.  With that in mind, I would have thought that Sugary Shorts: Volume 2 would be incredibly disjointed and feel too busy at times.  That's not the case here at all.  The stories really do manage to catch the feel and atmosphere of the television show itself and does so in a way that will really impress the fans of the show.

The writing itself also does a great job of staying relatively cohesive and give the collection a great sense of flow and pacing.

Art wise, there really isn't any certain art style that you would be able to pinpoint at all.  In fact, I would even go so far as to say that the art here really does have a bit of something for each and every fan.  You have some that look absolutely identical to the television series but then you have some much darker styles.  The sheer variety of art here does add a great touch to the collection.

The stand out story for myself would have to be the soft and subtle storytelling of 'Heart' that deals with a charming story of friendship.

One of the biggest strengths of the collection is the fact that it deals with so many different themes that each story that it really feels like a collection of episodes.  That said, there were a couple of times where the sheer difference of the stories did tend to feel slightly jarring but not to the point of being distracting.

All in all, if you are a fan of Adventure Time then this is definitely a collection that you will want to add to your collection.