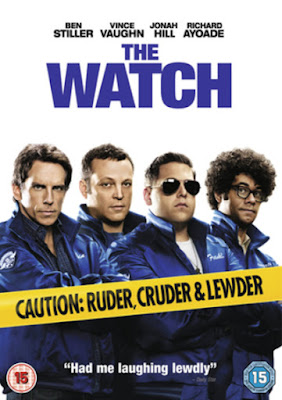 
Comedy starring Ben Stiller Vince Vaughn Jonah Hill and Richard Ayoade as a group of friends who form a neighbourhood watch group in order to win time away from their responsibilities only to discover a plot to destroy the world.
While Evan Trautwig (Stiller), a newcomer to the suburban neighbourhood, may have a legitimate reason for forming a crime watch group following the recent murder of a friend it is clear that for most of the men ulterior motives are at work.

Indeed Bob Finnerty (Vaughn) seems to spend a lot more time examining the dating habits of his daughter Chelsea (Erin Moriarty) than he does looking for threats.

However when the men stumble across what appears to be an alien plan to destroy humankind they understand where their responsibilities lie and set out to counter the threat.

There have been a great many movies that have tried to mix comedy, action and science fiction, some to successful and others not so much.  Where would this one end up in the grand scheme of things on that front?

I have to admit that Ben Stiller being in this one didn't really fill me with much confidence but considering that it had the fantastic Richard Ayoade, from television's The I.T. Crowd, I was eager to watch this after picking it up for next to nothing in a sale.

Some of the reviews weren't very promising for the movie but I've never been one for taking them for gospel so I sat down to watch this one with a very open mind.  In fact I look at movies in a simple way.  Am I entertained by the movie I'm watching regardless of budget or cast?  If the answer is yes then it gets a good score.

The Watch isn't a movie that is going to break any awards for originality but that's where the fun nature of it comes in.  This is a movie that really made me think of the comedies from the 80's and 90's that just didn't care what jokes they went for as long as they got a laugh.  This movie handles that approach in such a way that with the thick and fast delivery of the jokes, the viewer doesn't get a chance to get bored or put off by any jokes that don't tickle their funny bone.

To write this one off as just a gross out comedy but with added aliens would be a real mistake.  I liked the simple fact that there were some really good moments of character development and Stiller, not normally someone I enjoy in a movie, really gave a great performance as Evan.  He created a slightly neurotic but fun character yet he acts like the emotional linchpin of the movie itself.

There were a couple of moments where the movie felt a little disjointed but for the most part, the movie is absolutely hilarious, heart warming and definitely well worth picking up.  Ignore the really bad reviews that some of the sites gave this movie because it really is a fun way to spend a couple of hours.