The Dark Arts of Blood Review 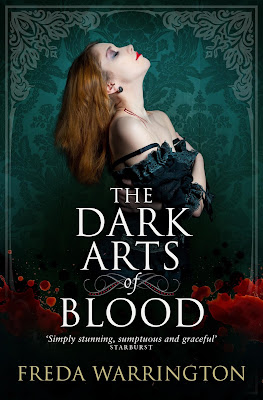 
1927: In the turmoil and glamour of 1920s Europe, vampires Karl, Charlotte and Violette face threats to their very existence. Fiery, handsome dancer Emil achieves his dream to partner the legendary ballerina Violette Lenoir – until his forbidden desire for her becomes an obsession. Rejected, spiralling towards madness, he seeks solace with a mysterious beauty, Leyla. But she too is a vampire, with a hidden agenda…

Is Leyla more dangerous than the sinister activist, Goderich Mann? When Karl and Charlotte undertake an exotic, perilous journey to rescue Emil, they unearth secrets that threaten disaster for vampire-kind.


The Dark Arts of Blood is the long-awaited brand-new fourth novel in the Blood books series.


Freda Warrington is a name that is very well known in the horror genre thanks to her massively popular series of novels that deal with the lives of her vampire characters.

I must admit that while I'm not the biggest fan of the vampire genre as a whole, Warrington's books are always well read, well researched and interesting with some well rounded characters.  With this being the fourth installment in the Blood series of books, I was thinking that maybe there would be a sense of "been there, done that" to this one.

After reading it, I have to admit that wasn't the case.  The story itself is well paced and has some really interesting moments of character development for those involved in the story.  Emil's descent in to madness is extremely well handled and, for me, easily the best part of the story by far.  I do wish there could have been more of it but, on the other hand, that may have taken some of the impact away from the strength of that story line.

The rest of the novel is well written, well paced and the characters are just as interesting as they were in the other novels.  That said, this book did come across as a bit of a weird one in that it had all the ingredients to be an absolutely fantastic novel yet for some reason, while written extremely well, it just felt like it had something missing.  It's kind of like when you go in to a fancy cafe, order the best looking cake but then it just doesn't taste as nice as you imagined.

That said, The Dark Arts of Blood, is one that will really impress the readers that have been eagerly awaiting a new novel.  They will definitely grab this one and absolutely devour it and rightfully so.  For the most part I did really enjoy this one, which considering that the genre isn't one that normally grabs my interest that's a really good show of just how good a writer Warrington is.  I think my one complaint with this novel would be quite simply that it felt like it really wanted to be let off of the lease and run free yet that didn't happen for some reason.