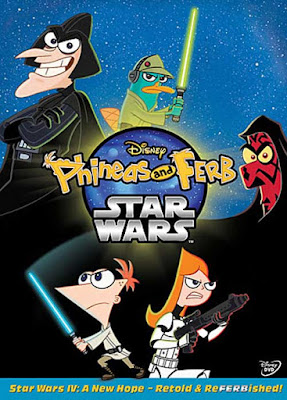 A couple of summers ago in a galaxy far, far away, Phineas and Ferb are happily basking in the glow of Tatooine's twin suns - until plans for the Death Star accidentally fall into their hands, thrusting them (and Agent P) into a galactic rebellion and an epic struggle of good versus evil in Phineas and Ferb: Star Wars.

Will Phineas and Ferb be able to resist the Dark Side?  Will Stormtrooper Candace finally bust a Rebel?  Can Agent P stop Darthenshmirtz from using his force-powered 'Sith-Inator'?

May the Ferb be with you...always.

When Disney bought the rights and everything to do with Star Wars, I have to admit that I was a little worried about what kind of lame tie-in's and spin off shows and movies we would be getting.

After seeing the team up with the Marvel superheroes and the team from Phineas and Ferb, I was wondering how they could do the same but with the characters from Star Wars but without it being just another in a long line of spoofs.

That's why when I sat down to watch this one with my little lad, I wasn't expecting too much from it.  I remember seeing the Family Guy version of the Star Wars trilogy, the original ones, and being entertained by them so I was hoping to at least raise a smile while watching this.

I have to admit that this one is definitely one of the best spin-off's and cross overs that I have seen in a long time.  I'll even admit that I actually enjoyed it more than the Family Guy ones too.  For a Disney release, there were quite a few jokes for the adults out there too.  My favourites were the little jokes and digs at the changes that were made in the special editions of the original trilogy.  That said, there were some absolutely fantastic gags in there for the little ones too, a lot of them had my little lad in absolute stitches too.

The thing that struck me was the simple fact that in most cross over episodes or spin off's, you get the characters from the show taking the parts of those in the movies but here, they're still the same characters that you know and love but their actions have an effect on what the actual Star Wars characters get up to.  The original characters such as Luke, Han, Chewbacca and more all turn up in small parts but they're very funny.

Considering you can get this one on DVD quite cheaply, and it has an additional five episodes from the television show included too, then this is definitely one well worth picking up.  If you are a Phineas and Ferb fan or a Star Wars fan, there is a lot here to get your giggle on.

Posted by Pat Scattergood at 10:50