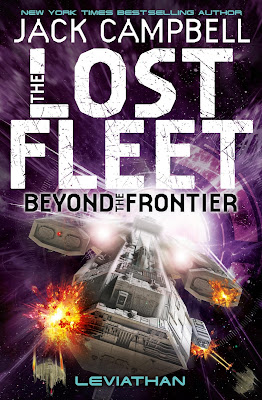 Two Syndicate World star systems have fallen prey to a mysterious fleet of warships—a fleet controlled entirely by artificial intelligence—that is now targeting Alliance space. The warships are no mystery to Geary. They were developed by his government to ensure security, but malfunctioned. If the Syndics learn the truth, the war with the Alliance will resume with a vengeance.

As the government attempts to conceal the existence of the A.I. warships—and its role in their creation—Geary pursues them, treading a fine line between mutiny and obedience. But it soon becomes clear that his fleet is no match for the firepower of the machine-piloted armada.

With the help of the Dancer species of aliens, Geary has tracked the A.I. ships to their secret base in the supposedly mythical Unity Alternate star system where his fleet, the last hope of the Alliance’s future, will end the conflict at any cost.


One of the things that has always bugged me about Jack Campbell's The Lost Fleet series is that while there is a great and action packed story under it all that really can hook the reader in at times, there always seemed to be a bit of humanity lacking about the characters.  At times they felt flat and at others you really started to care for them.

In this installment, Campbell has improved on the characters a bit and that has helped massively in making them people that you can get behind and can really begin to care about but there were still some moments that let the cast of characters down somewhat.  It almost seemed like as the characters were growing with the subtle development that was flowing along the story but that would then get cut off before they became too human, so to speak.

The main selling point of the series has always been the action packed sequences that had an almost cinematic quality to them and that is more than evident here.  There are moments that really had me on the edge of my seat and really gave me an almost Star Wars feel to them but there was a couple of parts where it almost became overkill.  It didn't quite reach that moment and Campbell seemed to pull back with enough time to make the reader want more instead of overdoing it.

With a series such as The Lost Fleet, it's almost impossible to review each part of the series without mentioning the other parts and that's true here.  Steadfast, the installment before this one really fell flat for me as a fan so I was a little worried that this installment would suffer the same fate.  Luckily Campbell really upped his game for this one and really created a much better story with a much improved flow.

Like I said earlier, the depictions of the battle scenes have always been the high point of the series and they really do shine here.  There is a great deal of tension throughout these scenes and that leads the reader to really begin to wonder just how the battles would end.  I do have to admit that sometimes they did feel a little bit busy but at the same time, the cinematic and authentic feel of the scenes really did feel like you were involved.

I have to admit that while this isn't the best book that Campbell has put out in to the science fiction genre, this really does get the Lost Fleet series back on track in a big way and really has made me excited to see where the next one is going to go.