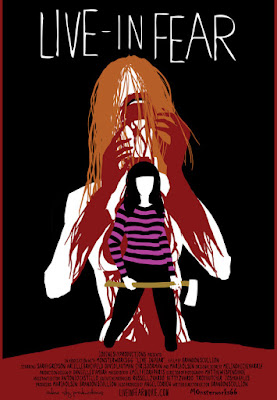 Written and Directed By
Brandon Scullion

In the snowy Utah mountains, an ancient being terrorizes four friends as they try to survive.

As a fan of indie horror in general, I've noticed that just recently there seems to be a second glut of found footage or vampire movies taking over the genre again.  That led me to starting to get slowly but surely bored of the genre.

That's when Live-In Fear turned up on my 'to review' list thanks to the wonderful people involved in the movie.  The first thing I noticed was the simple fact that it wasn't yet another found footage movie.  Now don't get me wrong, when done right then that kind of thing can be very creepy and interesting but there have been so many awful ones that I shudder the minute I hear those two words mentioned.  Well, I've digressed so back to this movie.

With micro-budget horror, there's always a 'come on you can do it' feel to the movies.  They don't have the big budgets to CGI the hell out of everything and that leaves them to find better, more practical ways to create the effects on the screen and that's exactly what we get here.  There are some impressive kills and gore effects here and while not all are successful, they were well done and a lot better than some I've seen in other movies.

The story itself is a bit of a weird one to pin down.  The one way I can think of describing it is that it kind of comes across as a bit of a weird, screwed nightmare and that's the best way to view the movie.  I have to admit that there were a couple of scenes that had me scratching my head and wondering just what was going on but with a little bit of closer editing, that would be solved easily.

The rest of the movie is very well done and comes across as really interesting and quite unique.  A lot of that is down to the writing and the good use of pacing and practical effects but there cast assembled here are really well chosen.  Obviously, with a big horror name like Maria Olsen involved, she was always going to rule the roost so to speak and that's true here.  Her powerful performance really adds like the linchpin of the movie and is a great foundation for the movie to build upon and they do.  For me as a fan, my favourite performance was by far that of both Arielle Brachfield as Mallory and Sarah Greyson as Becca.  I would have loved to have had a little more character development for their characters but they do extremely well with what they have here.

Another thing that I like about the movie was that it had a real retro feel to it.  In fact, it felt like it would have been right at home with the late 70's and early 80's horror movies that I love so much.

If you are a fan of the lower budget and indie horror movies then this one will be up your street.  There are some really interesting moments and some great performances to really get under your skin so this one is one that is well worth picking up.