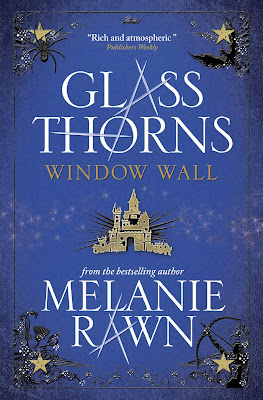 The fourth installement of the Glass Thorns series following Touchstone, a theatre troupe living and performing in a world where magic exists.

As political tensions build in their world, personal tensions build alongside. With Cayden denying his Elsewhens, his younger brother Derien coming into his magic and Meika apparently having a midlife crisis in his twenties, will Touchstone still be as strong as ever?

Well what can I say, Ms Rawn has done it again!

The plot has taken a slightly more tense twist, this time focusing even more around the tension between Cayden and Meika, the flow of writing is still as fluid as ever, enabling the reader to really get absorbed into the conversations and situations.

The themes of inequality and prejudices as voiced by the young prince who hates all magic, and the plays by Black Lightning gave pause for thought about the differences between people in our own world, which was a nice bit of extra food for thought.

All in all there is not much about this book I haven't said before about the first three, stunning pieces of writing, strong characters and situations, and yet again a frustratingly good cliff hanger!