From a High Tower: The Elemental Masters Review 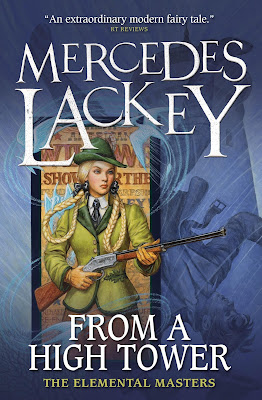 
When a man is caught stealing from a walled garden owned by a strange woman, he bargains away his youngest daughter in return for food for his family.  The woman, rumoured to be a witch, takes the golden-haired child and locks her away in a high tower.

Sixteen years later, Giselle has lived an isolated life, trained in Air Magic by her adoptive - an Earth Master.  But when her mother dies suddenly and Giselle finds herself a fugitive, she must use her magic and markmanship to survive on her own.


Mercedes Lackey appears to be very fond of fairy tales if her recent books have been anything to go by.  With this one a bit of a riff on the tale of Rapunzel, Lackey breathes new life in to it using her own unique style and lyrical flow of her writing.

Lackey has always been known for the sheer amount of detail she puts in to the worlds that she creates and that is no different here.  The world really feels like it could exist and because of that you are drawn in to their world and eagerly wanting to know just what is going to happen next.

As big a fan of Lackey's as I am, I have to admit that the characters have been a little bit hit and miss in some of her most recent work.  When compared to some of the other characters in her older work, there just seemed to be something missing but where on that line would this new book land?  Well, I have to admit that the main character of Giselle does come across as a bit predictable in places and because of that, I found it hard to root for her in certain parts of the book.  That said, next to Giselle, the character of Captain Cody, does feel a lot more interesting.  Yes he is a bit of a cad, someone who goes through women like hot breakfasts yet that's not all he is.  His character starts to grow as the book progresses and you find yourself really caring for him and wanting to know more about him.

The story itself is well written, well paced and an interesting take on a well known fairy tale.  One of the things that I like about Lackey is that no matter how many times an idea has been used, she always finds a way to make it feel completely new and unique.

All in all, this is a good addition to her ever growing library of work and one that is well worth picking up, especially if you are a fan of Mercedes Lackey.