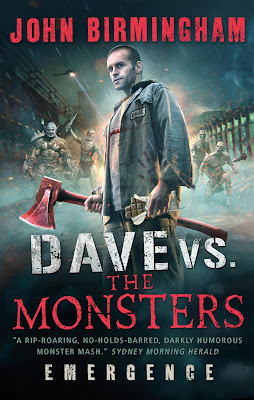 Dave Hooper has a hangover from hell, a horrible ex-wife, and the fangs of the IRS deep in his ass. The last thing he needs is an explosion at work. A real explosion. On his off-shore oil rig.

But this is no accident, and despite the news reports, Dave knows that terrorists aren’t to blame. He knows because he killed one of the things responsible.

When he wakes up in a hospital bed guarded by Navy SEALs, he realizes this is more than just a bad acid trip. Yeah, Dave’s had a few. This trip is way weirder.

Killing a seven-foot-tall, tattooed demon has transformed the overweight, balding safety manager into something else entirely. An honest-to-goddamned monster slayer.


When a dragon brings down the Vice President's plane and fresh demons emerge across the United States, monster slayer Dave Hooper realises that the battle of New Orleans was just the beginning.

Holed up in a swanky Las Vegas hotel, Dave is enjoying the perks of his new found celebrity.  But deep in the Under Realms, the monsters are regrouping, and it isn't long before Dave and his splitting maul are hauled in to action once more.

While his agent fields offers for movies and merchandise, Dave is tasked with ending a demon siege in Omaha, protecting the skies from a dragon horde and deciphering the UnderRealms' plans to take over the Earth.

As an ancient and legion evil threatens to destroy mankind, Dave may not be the hero humanity deserves. but he's the only one we've got.


With a name like Dave vs The Monsters, you should know exactly what you are going to get with a pair of books like this.  You want a wise cracking smart arse killing demons left, right and centre?  Well, that is exactly what you have got here.

The thing that struck me the most with the first installment, Emergence, is that this book is definitely one of those kinds of stories that you can just pick up and read without it being too taxing.  It has the feeling of a summer blockbuster at the cinema, the sort of movie that you go in to just wanting to be entertained and that's exactly what this book does.

Once Emergence gets the momentum going, it doesn't let up for one second.  The fast pacing really works well for a story like this and the fact that it doesn't take itself all that seriously really links in well with that pacing.  The thing that I really liked is that Dave isn't a stereotypical hero.  Instead he is quite frankly an ass hole and not afraid to show it.  Dave is the sort of person that doesn't know when to shut up, that doesn't give a damn who he offends and is a heavy drinking womaniser that definitely is all out for himself.  It's true that it can make him unlikeable but for me, it was a breath of fresh air.

I have to admit that this book isn't going to be for everyone but it is a hell of a lot of fun and hilarious in a "should I really be laughing at that" kind of way. 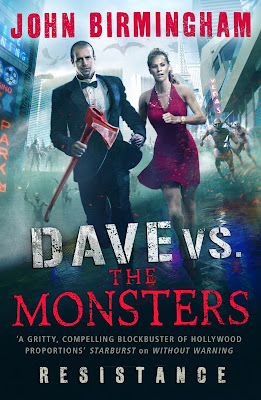 After the all out craziness of the first book in the series, Resistance had a lot to live up to.  Or apologise for depending on your opinion of the book itself.

With Dave having enough redeemable qualities in the first book to make him a little bit likeable instead of just being an ass.  Here, his new found fame has definitely gone to his head.  Birmingham has taken the character and turned him up to 11 in a big way.

The sheer increase in his ego really made him quite annoying at times but at the same time, that works in the construct of the story,  He's not meant to be the goody two shoes.  He's not meant to be the all singing, all dancing good guy that we are used to seeing in these sorts of stories.  Like in the first novel, he is pretty much out for himself.  He wants the fame and the fortune that comes with having saved the day in the first novel and if he saves the world again doing so then that is a happy accident.

With the fast pacing being one of the main strengths of the first book, the pacing here is much the same.  The fast pacing really brings the action to the forefront yet there is time for quite a bit of character development.  I quite liked the fact that he didn't turn in to an all out 'jolly good chap' and kept the things that made him an ass but his character grew as the story progressed.  He started to wonder just what his selfish nature was doing to both himself and the people around him but Birmingham managed to put that across without it derailing the character that had been build up in the first installment.

The only thing that bugged me about this novel was quite simply that there was a cliffhanger ending.  I know that's a hard thing to escape in the second book of a trilogy but it left me wanting it to have been a little bit longer just so I could have found out a little bit more so it did it's job well there.

In much the same way as the first book was, this follow up won't be for everyone.  It will definitely offend some people but personally, I enjoyed it and was a good bit of cynical, gore filled fun.