Dave vs the Monsters: Ascendance Review 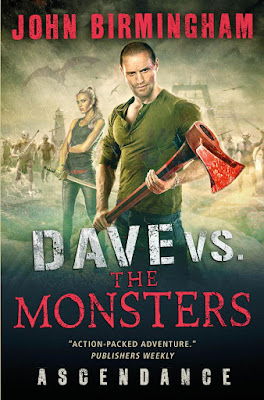 
Hardworking monster-slayer, Dave Hooper, tries to not bring his work home with him, but nowadays it's hard to keep them separate.  Email, cellphones, empath daemons, they never let a guy rest.

But when the legions of hell invade the small seaside town his boys call home, Dave has to make a call.  Save the world?  Or save his family?  Not as easy a choice as you'd think, since Dave's ex-wife expects to be saved too.  And there's no convincing her that the super sexy Russian spy isn't his girlfriend.  She's just his sidekick - and an assassin.


With the first two books in this trilogy being best described as a hell of a lot of fun under lashings of gore and completely un-politically correct humour, you pretty much know where book three is going to take you.

Ascendance works very well as the final part of the trilogy but one thing bugged me.  Considering that is meant to be the ending of the trilogy, it felt a little bit unfinished.

That said, the story itself was very well paced, the gore that the fans of the series have come to expect is all here and accounted for and there are some brilliant moments of both cynical and morbidly dark humour. The characters here are the ones that you either loved or hated in the first two books and in this one, yes, Dave is still a complete and utter asshole.

The fight scenes here have a very visceral feel to them and you can really see them jumping off of the page in a big way.  The only problem with them is that the sheer amount of them had me feeling a little bit like there'd be a slight bit of overkill, pun intended.

One of the things that I liked the most about this third installment is the simple fact that there are some very good links to the first two novels.  One of these is just how Dave's actions in Resistance are going to affect his life in this book and it's very well handled.  The simple fact that there were consequences to his actions was a very welcome addition to the book because other books in this genre tend to just let their characters do what they want and have nothing happen in return.

I must admit that this book, much in the same way as the first two, will most definitely not be for everybody.  The humour, that ranges from the broad, almost slap stick style through to gallows style, is quite literally thrown at the reader, as are the action scenes.  I feel that this book will be one of those divisive books that you either love or absolutely hate.  For me, I fall in to the first camp.  It's not a perfect book but one that I definitely enjoyed.