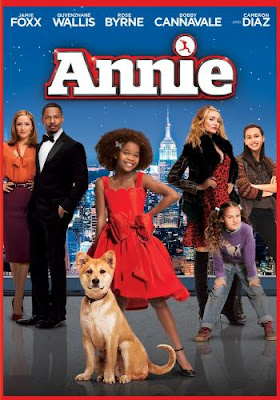 Based on the Musical By
Thomas Meehan

Based on the Comic Strip By
Harold Gray

Directed By
Will Gluck

Jamie Foxx as Will Stacks

Academy Award® nominee Quvenzhané Wallis (Beasts of the Southern Wild) stars as Annie, a young, happy foster kid who's also tough enough to make her way on the streets of New York in 2014. Originally left by her parents as a baby with the promise that they'd be back for her someday, it's been a hard knock life ever since with her mean foster mom Miss Hannigan (Cameron Diaz). But everything's about to change when the hard-nosed tycoon and New York mayoral candidate Will Stacks (Jamie Foxx) - advised by his brilliant VP, Grace (Rose Byrne) and his shrewd and scheming campaign advisor, Guy (Bobby Cannavale) - makes a thinly-veiled campaign move and takes her in.

Stacks believes he's her guardian angel, but Annie's self-assured nature and bright, sun-will-come-out-tomorrow outlook on life just might mean it's the other way around.

I honestly don't know where to start with this movie.  Not in a bad way, just after some of the vitriol thrown towards the movie, you would honestly think that it was the worst movie ever created.  One of the things that struck me the most was  the simple fact that a lot of the criticisms that were thrown at movie were due to the race of the characters shows a really sad state of the world we live in really.

I sat down to watch this with my little lad Cyrus, who chose this movie over both Strange Magic and Cinderella, but went in to it with quite low expectations because of just how much I love the version starring the legendary Tim Curry.

After watching this one I realised that this movie is actually very entertaining.  I'm the sort of movie watcher that doesn't mind if they change the sex or race of a character.  I go in to it thinking that if the actor or actress can do a good job of a character then those things have nothing to do with if the movie will be good or not and that's the case with this one.

The cast do an absolutely top notch job of making the characters both believable and entertaining.  There's also a very sweet, emotional core at the heart of the movie that really makes it one of those sorts of movies that warms your heart but without it feeling too sickly sweet.

A lot of that boils down to the chemistry between Jamie Foxx and the young Quvenzhané Wallis.  Their performances are so assured that you can see the relationship between them grow as the movie progresses and it's really sweet and charming to see.  Yes there are some cliched moments but their roles really made the characters rise above what might have otherwise been a shadow of a copy of the originals.

The only cast member that didn't really impress me was that of Cameron Diaz.  I'll admit that I've never been her biggest fan in the world but I found her very irritating in this movie.  I know her role is that of someone that is meant to be hated but will then find redemption, which is a well worn road in this type of film but her performance came across unable to decide whether to be understated or over the top.

As a musical rests on it's songs, I was pleased to see some of the originals included in the movie itself.  I know there was a bit of an outrage about a couple of line changes but they worked well within the confines of the world they created for the movie.  The new songs here do work well in the movie as well so I feel there was a nice mix of the old and new included.

All in all, this was never going to be that much of an original movie.  They went down some very worn paths and there were a few parts that felt quite cliched.  That said, the performances by the cast, especially that by the adorable Quvenzhané Wallis absolutely owned the movie and for that alone, I would recommend it.

The only downside is that my son has gone to bed singing 'Hard Knock Life' but hey, it's taken over from 'Let it Go' at least.