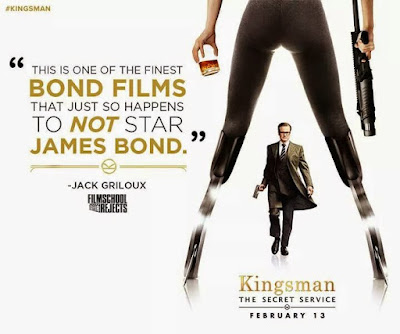 Based on the Comic Book By
Mark Millar
Dave Gibbons

Based upon the acclaimed comic book and directed by Matthew Vaughn, Kingsman: The Secret Service tells the story of a super-secret spy organization that recruits an unrefined but promising street kid into the agency's ultra-competitive training program just as a global threat emerges from a twisted tech genius.


As a fan of movies such as Kick-Ass and Defendor, I've always had a bit of a soft spot for the ultra violent movies that manage to have an almost pitch black sense of humour.  Matthew Vaughn's movies nearly always manage to have that cynical and dark sense of humour running through them so I had high hopes for this movie, especially considering it's based on the comic book series written by the controversial Mark Millar.

Where Kick-Ass took the superhero genre and shook it by it's collar until a unique, funny and strong movie came out.  Kingsman: The Secret Service doesn't do that.  Instead it kicks the movie watchers in the groin with a wry smile and a wink.

The idea of a gentleman spy going on missions and trying to groom a newcomer to the world isn't a new one.  In fact, you could easily fill a whole blog with just that kind of movie.  However, this movie does the story in such a way that it fills completely new.  Not only that, Kingsman is the sort of movie that takes the things that make the James Bond movies so popular and ramps them up to 11 but does so with a sense of style and fun.

A lot of the movie is successful because of the performances of the multi star cast.  You have the likes of Samuel L. Jackson, Colin Firth and even the brilliant Mark Hamill in the cast and their experience and confidence in their roles really shines through.  Jackson's performance as the villain Valentine, really seems to see him absolutely loving hamming it up.  Alongside the classy and subtle performance by Firth, the whole movie really rattles along at a great pace but does so in such a way that you find yourself not only rooting for the characters but also feeling like you are involved in their story.  It was great to see Hamill in the movie too and in a bit of trivia for the readers out there, Hamill plays a professor in this movie but in the comic series, Hamill himself is a celebrity that is one of the first ones kidnapped.

The ultra violent and cuss filled action may not be the sort of movie to please every viewer and there will no doubt be some that are offended by the movie and that is fair enough.  It's definitely not a movie for everyone.  However, I really feel like this is the sort of movie that could become a cult classic and one that will hopefully give the spy action genre a much needed shot in the arm.