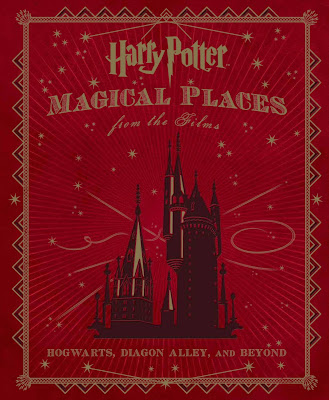 
From Hogwarts Castle to Azkaban and the Ministry of Magic, the unforgettable locations of the Harry Potter film series are in many ways just as beloved as the characters themselves.

Harry Potter: Magical Places From the Films is a captivating look at the imaginative sets that were designed, built, furnished, and digitally enhanced specifically for the blockbuster films.

Detailed profiles of each setting include never-before-seen concept are, behind-the-scenes photographs, film stills, and other filmmaking secrets from the Warner Bros. archive.

A removable map of Diagon Alley, a replica of the original created for the Leaky Cauldron set, and a pamphlet featuring a selection of the paintings of Hogwarts complete this one-of-a-kind follow up to the acclaimed Harry Potter: The Creature Vault.


The Harry Potter movies and books are very popular in  my house with both myself and my wife as well as my little son so when I was offered the chance to review this book, I have to admit that I jumped at the chance to do so.

With such a massive wealth of information to choose from, I was a little worried that this book would be quite cluttered and too busy but Jody Revenson has done a truly brilliant job of creating a book that really does fit the brief of having something for everyone.

The first thing that struck me was just how gorgeous this book looks.  From the stunning cover right through to the layout of the book itself, it really is more than just a tie-in book for the fans of the movies.  It's a book that you can pick up again and again, noticing new bits here and there each time you open its pages.  Some of the concept art is utterly amazing, and if I'm honest, wouldn't look out of place on a gallery wall.  Thanks to the concept art, you really can see the evolution of the settings in such a way that it is like watching the movies come to life as you read.

Despite having so many gorgeous photographs, paintings and much more, the book would have fallen flat if the writer didn't have a style that would match up to the book itself.  Here, that isn't a problem at all.  Jody Revenson has done a brilliant job of writing a book that will not only hook the fans of the books and movies in but also people that may not be all that familiar with them too.  Her easy going and fluid like writing style really does make this not only an informative read but an enjoyable one as well.  There were times where the book actually felt like it was written by a fan, a labour of love so to speak, and I mean that in the highest possible terms.

As well as the behind-the-scenes stuff, there are some great surprises for the fans.  I won't list them all here, as that would take away some of the fun of finding them, but my personal favourite has definitely got to be the 'paintings of Hogwarts' selection.

All in all, if you are a Harry Potter fan, or even just someone with the slightest of passing interest, this is an absolutely essential book to add to your, no doubt, already overloaded shelves.  Just be prepared to keep coming back to it time and time again to find new little surprises.