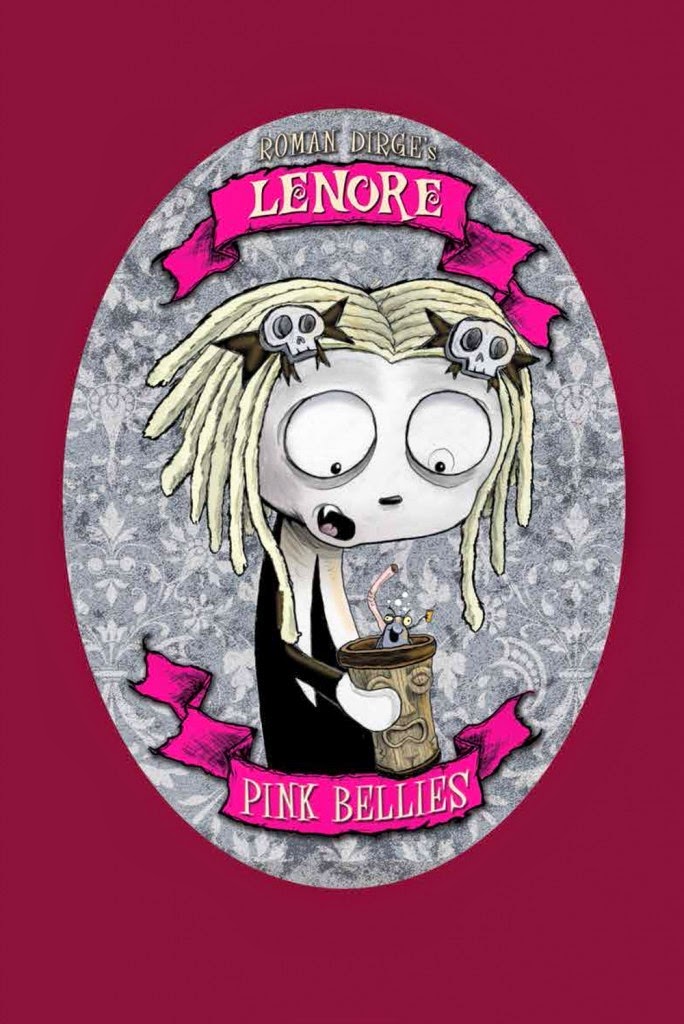 Written and Illustrated By
Roman Dirge

The world's cutest, most adorable and pungent living-dead girl is back with a tale one year in the making, a tale of extreme silliness, ickiness and dramatic-iness and one that will leave the universe of Lenore shaken to it's very foundations...

Lenore: Pink Bellies collects together a four-book story arc that not only reveals the secret origin of Lenore's uber-mysterious protector, Taxidermy, but also sees a much-loved member of the Lenore universe die, never to return.


The Lenore series from Roman Dirge has always been massively popular and rightfully so.  The dark humour hidden under a story that looks cute on the surface has always been something that has hooked me in whenever a new installment comes out.

The thing I have always loved about these series of books by Dirge is the simple fact that Dirge can put the most extreme things on to the page but thanks to the extremely funny moments and the absolutely gorgeous art, you find yourself falling in love with the entire, varied cast of characters that he has created.

The fact that Lenore has been going for twenty years is obviously a testament to the strength of the writing, the stories themselves as well as the love that the fans feel for the character.  The fact that Dirge can make you really get you involved and emotionally hooked in to the lives of some very strange characters like these but make it feel completely normal to feel like that, that really shows just why they have lasted twenty years.

This collection serves as a really good jumping on point for anyone that may not be all that familiar with the adventures of the cute, little dead girl.  It is true that there are some jokes and moments here that the long time fans will get a much bigger kick out of but for the most part, Pink Bellies will not only hook in new fans but will delight the older ones too.

The sheer amount of pop culture references are very well done here.  How Dirge manages to fit so many in without it getting in the way of the main story is beyond me but he drops some absolute zingers here that had me howling with laughter.

If you enjoy shows such as Family Guy, or some of the Adult Swim stuff that's doing the rounds at the moment, then you will love this charming, macabre and very funny collection.