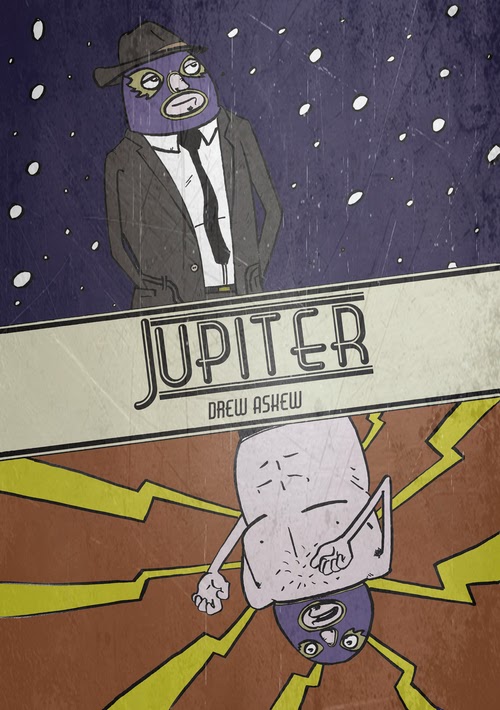 Written By and Art By
Drew Askew

Published By
Ink and Booze


Jupiter is a man with a past, a really cool, movie star, pro wrestling past. That's all behind him now though and what's ahead has pointy teeth and has kidnapped a whole bunch of scientists. It's going to take more than elbow drops and high flying footwork to solve this case!

Presented in black and white (like a proper noir) Jupiter is the first chapter in a Ghostbusters meets Raymond Chandler world full of Femme Fatales, ghosts, dropkicks and tommy guns.
Review
When I saw the premise for this indie comic, I have to admit that it definitely grabbed my interest.  A Mexican wrestler that investigates crimes that have a paranormal / supernatural slant to them?  Definitely something that I would grab off a shelf.
After taking a look, Jupiter is a fast paced, random as hell comedy with some instantly quotable lines and moments.  There's a cynically sarcastic feel to the humour and it works really well with the flashy and frantic art.

Much of the quality comes from the simple fact that the first issue lets you in to a little bit of Jupiter's back story but then throws you full in to the action.  I loved that fast and funny pacing that Askew really excels at here.  You're not really given a chance to rest up or catch your breath before the next quip or the next action sequence.

Another thing that really struck me was the art.  Like I said earlier, it has a frantic sense to the art and that really shows on the more action packed sequences in this issue.  Askew's style really gives a fantastic sense of movement to the characters, which considering one of  them is a masked Mexican wrestler that's an important part of just why this comic works so well.

One of the things that this comic reminded me of was the movie Bubba Ho-Tep starring Bruce Campbell.  Yes that had a completely different setting but the humour that runs throughout the story really reminded me of that movie, mainly because of the cynical nature of some of the jokes here.  To be honest, it was quite refreshing to see a comedic indie comic that knew exactly what it was and played to it's strengths in such a successful way.

All in all, I can't wait for the next issue of this one.  Jupiter is definitely a title that I will be keeping an eye on.  It's funny, exciting and had a great ending that left me wanting the second issue.

Plus besides, who would want a comic book with a line like "And this one smelled like Houdini's butt hole" in it?