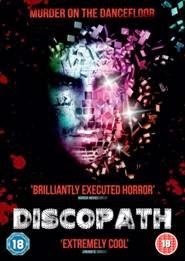 Written and Directed By
Renaud Gauthier


The mid-70's: a timid young New Yorker leads an uneventful life until he is fatefully exposed to the pulsating rhythms of a brand-new genre of music: disco.

Unable to control his murderous impulses that stem from a traumatic childhood experience, Duane Lewis transforms into a dangerous serial killer exiled to Montreal.


This movie is a confusing one if I'm being completely honest with you readers.  With a premise such as this one, you'd expect a movie to be utterly bonkers and even maybe rediculous in places yet with the movie fielded as a homage to the old school movies such as those by Brian de Palma, it takes itself quite seriously in some places and close to comedy in others.

Was the director aiming for comedy or serious homage?  I'm not really all that sure yet that said, this movie is a quite enjoyable but slightly disappointing one.

The movie itself is shot in a rather dark and almost 'grindhouse' style way in that it wants to look like it was made in the 1970's as well as being set in that period.  For the most part, that approach works and it looks grimy and authentic.  The music helps give it that feeling as well but that is hurt slightly by the smaller budget because it means that certain songs get played a lot during the movie and I actually found that a bit distracting.

When the death count starts to mount, the gore effects are pretty well done considering the budget.  It's not going to set the horror world alight but the effects reminded me of movies such as Maniac and Tenebrae so to a horror fan such as myself, I thought that was a nice touch.

Performances wise, there were some really good moments with the cast but then there were some moments where they were so wooden that it felt it was definitely on purpose and meant as a bit of an almost comedic side of the homage.  That was most true with some of the reaction shots that really seemed over the top but in a quite fun way.

All in all, this is a movie that is quite an interesting concept and is, for the most part, relatively well made and shot.  A couple of the performances hurt the movie however, as did the slightly confused personality of it due to veering from comedy to full on horror movie.  That said, while disappointing, it's still a movie that is worth checking out for an interesting premise.

Discopath is available to buy from May 4th.

Posted by Pat Scattergood at 11:18