Behind the Curtain Review 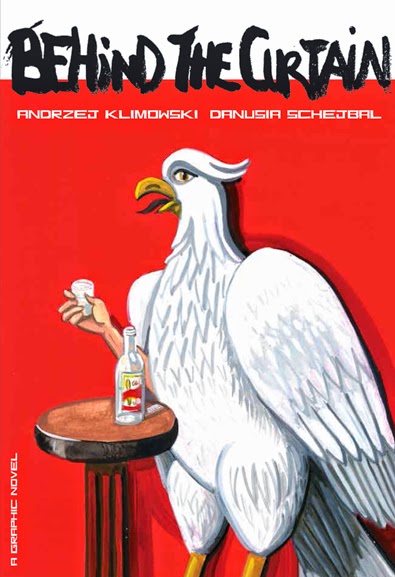 
During the 1970's, many East European citizens dreamed of going West.  Behind the Curtain is an autobiographical account of two young art students who travelled the other way.

Studying and working in Poland, they found themselves part of a vibrant community.  Producing visionary work across the arts - even as prices rocketed, trade unions drove social unrest and, finally, tanks appeared in the streets.

A unique collaboration interweaving two distinctive styles, Behind the Curtain combines life, art and politics to reveal the cultural environment that flourished despite the harsh realities of the communist state.

When toilet paper is worth its weight in gold, what price do you put on expression?


As regular readers of this site will know, I am quite a big fan of the work that Self Made Hero put out.  The thing that makes them stand out to me as a publisher is the simple fact that their releases are so incredibly varied.  Behind the Curtain is one of those such releases.

Self Made Hero is a publisher that will often take work by artists and writers from various countries that we might not otherwise get to see.  With Behind the Curtain, they have continued that in a rather impressive way.

The story of the 1970's exodus of citizens going West in the hopes of finding a better life and future is a story that has been well documented.  Yet here they tell the story of the people that went the opposite way.  I personally haven't really read a lot of that journey so I was very eager to get my hands on the story behind that journey.

Here, Behind the Curtain, tells the story of two young students that travelled to Poland in order to study art and to hopefully make a name for themselves in a place that had a bustling art scene amongst all the political and social upheaval that surrounded them at the time.

The way the team of Klimowski and Schejbal combine their deeply personal stories alongside that of the political rise of the communist state as well as their hopes and dreams is so well handled that the story has so many layers to it that you will come back to it again and again.  The thing that I loved the most about Behind the Curtain is the fact that the story is hard hitting, incredibly sad in places but still comes across with a sense of hope and determination.

The historical side of the story is very well written too and perfectly captures this important period in history in such a way that you feel like you are inside the story with them and watching it all unfold in front of your very eyes.

Art wise, this book has a simple, gritty charm to it and made me think of the old style newspaper comic strips that you used to get in the daily newspapers.  That style to the art gave the story itself a bit of an old fashioned charm yet without feeling dated.  In fact, the art was treated as if it was another character in their heartfelt story and was used so effectively that it really draws your eyes to what is happening on the page.  It's there that you start to notice all the little details that they have put in to the story and that, for me, really raises it up to a much higher quality.

As a fan of autobiographical stories, especially when given a setting that stands in such an important part of political and social history as this one, Behind the Curtain is a graphic novel that, for me, feels like a very important read and one that should definitely be on a lot of shelves.