Way of the Wicked Review 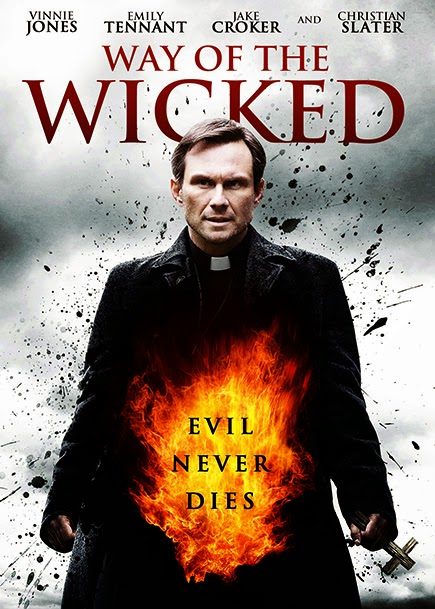 
Father Henry goes to a local police detective and they learn that a troubled teen with a dark past has recently moved to town and has set his sights on the cop's beautiful, young daughter. Father Henry, who turns out to have secrets of his own, finds himself pitted against a demonic force more diabolically evil and twisted than any of them could have imagined.


With a rather interesting premise, I have to admit that I was quite interested in where they would take a story such as this considering how many times stories of a similar style have been released.

When I saw Christian Slater plastered all over the movie posters for this one, I was kind of expecting him to be all over this movie but in the grand scheme of things, he's not really in it all that much.  That's a bit of a shame because when he does bring his 'a' game to a movie, there are still flashes of the talent that made him such a huge name in the 80's and 90's.  Here, not so much.  There were some scenes where he really stole the movie with a darkly cynical take on the over used priest character but then there were other scenes where he looked absolutely bored witless.

Then there was Vinnie Jones.  The thing I really liked about his performance was that, for once, he wasn't playing a thug or a heavy for a mob.  In fact, he gave a solid and actually quite subtle performance as the town sheriff.  The casting for him in this movie did seem a bit of a strange choice for the part but it worked pretty well.

As for the story itself, it didn't really feel all that original.  There were moments that felt like a lower budget version of The Omen even with some of the twists and turns.

My main problem with the movie was the simple fact that the movie really didn't live up to the interesting premise because of the simple fact that the flow was really off.  There were moments where a lot was happening but then there were rows of scenes that didn't really seem to go anywhere important with the story.  Even with the twist at the end, it was very easily telegraphed and even had me groan at the obviousness of it.

Also watch out for the killer tractor without an engine and no I'm not joking.

All in all, this isn't the worst low budget horror I've ever seen but I wish they would have been braver and tried something a little different considering how often this type of movie has been made.  There were some unintentionally funny moments that did take me out of the movie but then there were some really good performances from Vinnie Jones and even some flashes of cynical talent from Christian Slater so it's still worth a watch if you can find it cheap.

Posted by Pat Scattergood at 15:22