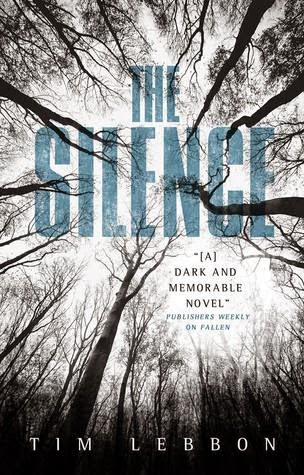 
In the darkness of a vast cave system, cut off from the world for millennia, blind creatures hunt by sound.  Then there is light, there are voices, and they feed...

Swarming from their prison, they multiply and thrive.  To scream, even to whisper, is to summon death.

Deaf for many years, Ali knows how to live in silence.  Now, it is her family's only chance of survival.  To leave their home, to shun others, to find a remote haven where they can sit out the plague.  But will it ever end?  And what kind of world will be left?


With a storyline such as the one used in The Silence, I was expecting there to be a lot of The Descent or Pitch Black moments but that wasn't the case here at all.  Despite there being a voice at the back of my mind wanting to compare those movies to this book, it didn't fit in to that mould at all.  Instead, Tim Lebbon has crafted a story that is both subtle, creepy and very addictive.

The thing that struck me the most about The Silence is the simple fact that the story comes across as utterly unique in both it's execution and it's style.  The slow, deliberate pacing really adds up to give the story a feeling of dread and fear that runs just under the surface to such a degree that the story really gets under your skin and doesn't let go for one moment.  That turns this novel in to one that you just can't put down.

Another thing that I really liked about this book was the simple fact that the 'big bad' wasn't some demon from Hell or a vampire type villain.  Instead, despite the premise of the story itself, it felt utterly realistic.  The violence and gore during the story is very well handled and really effective in how it delivers a gut punch to the reader.  Alongside those moments, the characters are handled so well that you are drawn in to their world and in to seeing the harsh decisions that they have to make in order for them to merely survive.

Talking of the decisions side of things, there are moments where the dread is built up to such an effective degree that when they do have to make the decisions, you are so drawn in that you can't help but be swept along with the story.

If you have never read any of Lebbon's work before then The Silence is a great book for you to read to become accustomed to his fluid, almost lyrical writing style.

If you want a story that is going to stay under your skin long after the story has ended then you are definitely in for a great ride with this one.  Creepy, full of dread and gore, this is definitely a book that deserves to be in the collection of any horror fan.  Even if you aren't one, this book is so effective at building the tension and fear that you should pick it up and be prepared to lose the rest of the day because you won't be able to put it down.