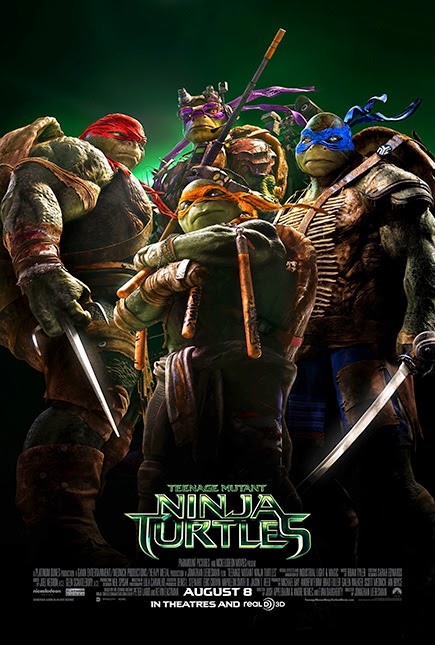 Based on Characters Created By
Peter Laird
Kevin Eastman


When a kingpin threatens New York City, a news reporter find a quad of mutants which makes an alliance to unravel Shredder's plan as the Teenage Mutant Ninja Turtles.

With so many awful reviews about this movie, I have to admit that I went in to this movie with some very low expectations.  Don't get me wrong, the story of a group of crime fighting turtles wasn't going to win any awards but I went in to thinking that as long as I was entertained at least then it was worth seeing.

As a fan of the original comic books created by Peter Laird and Kevin Eastman, I sat down to watch this one.  Even with some low expectations I have to admit that this movie wasn't really one that I would be in a rush to see again.

I'm not one of those sorts of fans that bemoans changes made to long running characters.  Far fromt it.  So when I saw just how many changes were not only made to the turtles but to the other characters as well, I wasn't in the slightest bit surprised.  Some of the changes worked and others just seemed really off.

The problem for me wasn't the characters themselves, it was the story.  Not only did it fall flat, there were large parts that just seemed there in order to pad out the running time.  Some of the twists and turns were so glaringly obvious that I literally moaned when they appeared on the screen.  It was the same with some of the dialogue.  There were quite a few scenes where they were trying to walk the line between being a dark, gritty take on the Teenage Mutant Ninja Turtles and trying to inject some humour in to the story but they seemed to clash really badly.  Also for a movie that is meant to be about the crime fighting team of turtles, it seemed more concerned with the character of April O'Neal, played in typical wooden fashion by Megan Fox.  I wanted to see the turtles together more, see how they worked as a team, but instead we got O'Neal, who is supposed to be a highly intelligent reporter, making some really random and dumb decisions and some bad attempts at jokes by Will Arnett.

That said, it wasn't all a bust.  The thing that I did like the most about the movie were the little in jokes about all the other versions that there have been of the long running crime fighters.  There were nods to the classic comics, the animated cartoon from the 90's and more.  They even managed to slide in the "Tonight I dine on turtle soup" line as well, which got a chuckle from me.  I also liked the little jokes here and there that were thrown at the team by the various turtles, the best being the quip about Raphael trying to sound like Batman.

All in all, this is one of those movies that is a bit of a guilty pleasure.  In fact, I would say that it's one of those unintentionally funny movies that make you laugh with just how bad some of the scenes are and there is plenty of scenes that fit that bill here.

Posted by Pat Scattergood at 16:27