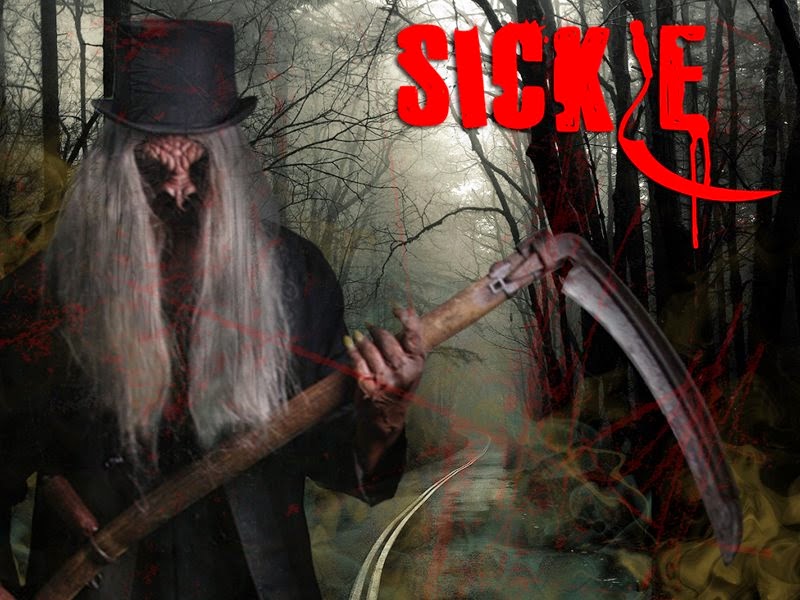 
Twelve year old Michael Hart is convicted of the murder of a babysitter, despite his claims that a "monster did it." Upon his release, the monster returns and the bodies are piling up.

Is it the Grim Reaper? Is it the Mothman? Whatever it is, it's a killing force and Michael must prove its existence to clear his name but must also face the darker side of humanity.

What is SICKLE and can it be killed?

Michael Hart will find out if it kills him.


With indie horror movies, there is a very hit and miss way with the genre.  For every impressive movie that really gets under your skin, you find there are easily 3 or 4 movies that are just awful and sometimes even painful to watch.

I have to admit that I wasn't really sure what to expect from Sickle.  The synopsis sounded really interesting but I hadn't heard of the people involved or the company that was behind the movie so when I was given a chance to take a look at it, I went in to it with pretty open expectations.

Sickle is one of  those movies that you will either really like, especially if you are a fan of indie horror movies, or you'll hate.  There isn't really a middle ground for it to be honest.

The writing itself is pretty well done.  The idea that runs through the story really likes to mess with the idea that the murders are either committed by a supernatural entity or by a very sick individual.  When the movie does veer in to the supernatural side of things, it does it a lot better than some of the other indie movies I've seen recently.  The idea behind it may not be the most original in the world but I've seen a lot worse and besides, it's well done for the movie we have here.

Acting wise, it's a bit of a mixed bag.  A couple of the characters seem really natural and organic with their performances.  One of my favourite was by far Logan Lopez who really gave the character of Michael quite a creepy feel without falling in to melodramatic over acting.  That's most true of the scenes where he has just left the asylum and an overwhelming sense of loneliness just prevades through the movie itself.  It really made you feel sympathetic to the character, which added another layer to him.

For me, the movie really reminded me of movies like Phantasm and even The Mothman Prophecies in places.  There even seemed a little hint of Halloween as well.  And for you horror fans, the kills here are pretty well done and make good use of their budget.

When the reveal of Sickle finally happens, the thing that struck me was the simple fact that the character would look absolutely brilliant as a horror comic character.  I loved the design and the costume work for him as well.

The one complaint I would have for the movie, other than some of the characters feeling like they were just horror movie cannon fodder, is that the movie itself felt like it needed a little bit more of a balls to the wall feel, a little more pep in it's step as my father would have said.
I have to admit that while it won't set the world of indie horror movies on fire, this is still a lot better than some of the recent ones I have seen.  With some good direction, interesting kills and a creepy performance from Lopez, this is definitely one that is well worth seeing at the festivals that it's appearing at.

Posted by Pat Scattergood at 15:48