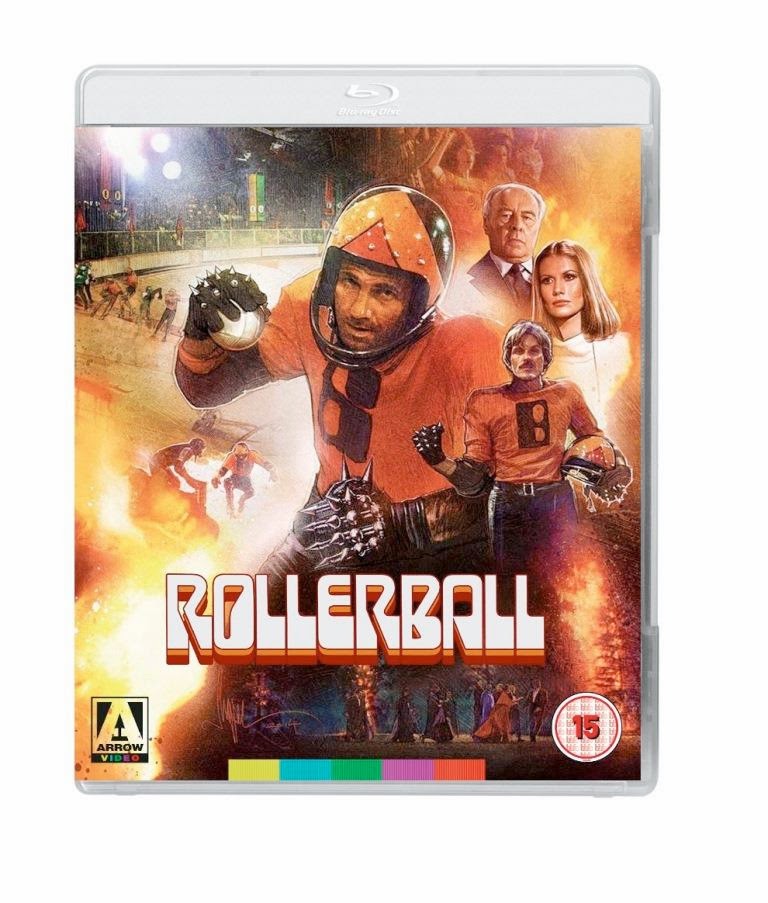 
In a corporate-controlled future, the world’s nations have been disbanded and conflict is a thing of the past. But blood continues to be shed on the tracks of Rollerball – a brutal contact sport which pits players in a battle of life and death.

James Caan (The Godfather, Thief, Misery) plays Jonathan E., celebrated captain of the Houston Rollerball team whose prowess on the track has earned him renown across the globe. But this fame has also attracted the ire of the games’ corporate sponsors, who wish to suppress any displays of individual achievement – fearing this could encourage the populace to revolt. With the powers-that-be pushing for his retirement, Jonathan is faced with a choice – concede to the Corporation’s will or take a stand, by continuing to compete in the increasingly deadly games.

Shot in Munich to make use of the city’s futuristic Olympic architecture, Rollerball is a classic slice of dystopian filmmaking, mixing high-octane action sequences with gripping (and thoroughly prescient) social commentary. The future is now – the future is Rollerball!


The original Rollerball movie has long been one of my favourite movies of all time.  The satirical look at the way some people have an insatiable need to see and view violence has always interested me and the movie handles that brilliantly but for some reason, I hadn't gotten around to watching it for a very long time.  Would it match up to my memories of the movie or would it have aged really badly?

Well, with Arrow Films bringing out a remastered Blu-Ray of the movie, I thought now would be the perfect time to take a look at what was one of my favourites of all time.

The first thing that I noticed about this movie was that quite simply, the transfer was absolutely gorgeous.  You can still tell that the movie was made in the 1970's but the picture quality really looked as if the movie could have been made now.

Now that I'm older but not so wiser, the satirical themes that made this movie so fascinating to me in my teenage years, are much closer to the forefront than when I first watched it.  The way that Jewison directed this movie really makes it stand out as a beacon and a message about the sometimes insane need that humanity has to see violence and people being hurt.  Ironically, the movie became so popular that, at the time, there was even talk of people setting up the leagues themselves.  Talk about missing the point of the movie!

With forty years having passed since the movie was first released, I was a little worried that the movie would have aged really badly but that's not the case.  Much of that is down to the sharp and decisive writing by William Harrison.  The points made in this movie could very well be made in a movie now and still be as important as they were then.  Don't worry movie fans, I haven't gone mad.  I'm just ignoring the awful remake from 2002 that had none of the quality that this movie has.

One of the things that I liked about this movie was the simple fact that the cast is universally good to great across the board.  That said, the movie belongs to James Caan.  He plays the part of Jonathan E with the hints of the masculine, action hero personality that he would need yet he gives the character a sense of sympathy, an emotional core that would have been missing otherwise.  It's that performance that really makes the movie on that is unmissable.

As with a lot of Arrow Films releases, the special features here are a veritable treasure chest of treats for fans of the movie itself.  There are interviews, behind the scenes, even a look at the amazingly choreographed stunt work that made this the first movie to have the stunt workers listed with a screen credit that is still used to this day.

Despite being 40 years old, I honestly believe that this movie has an important message that still rings true today.  Because of that, the breath taking stunt work, great performances and the sheer volume of special features makes this movie and it's Blu-Ray release an essential purchase.

Posted by Pat Scattergood at 04:11