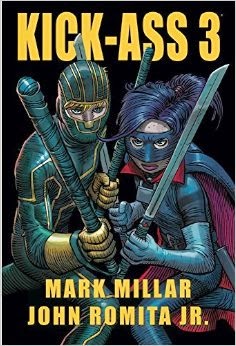 
Who knew an 18-year-old could become a real superhero?

Dave Lizewski did - and after receiving intense training from the tween black belt known as Hit-Girl, Lizewski actually started to earn his superhero name Kick-Ass.  He and Hit-Girl took on the mafia...and won.  But victory always comes at a cost.

With Hit-Girl now in prison, Kick-Ass must step up to lead the demoralised crime-fighting team Justice Forever just as the police have outlawed superheroes.  Kick-Ass must hold the group together as the terrifying mafia boss Rocco Genovese returns from exile with a grand plan to unite all the East Coast crime families.

It's maybe not the best time for Dave to fall in love.  But thanks to a real, honest-to-goodness girlfriend, he's starting to realise that maybe there's more to life than fighting crime.

Without Hit-Girl to keep him on point, can Kick-Ass rally to win the day himself?


Who knew that when the first Kick-Ass comic hit the stands that we would be sat here years later with four graphic novel collections and two successful movies baring the heroes name?

Well, here we are.  We've reached the end of the intrepid adventures of the two heroes known as Hit-Girl and Kick-Ass but do they go out with a bang or with a whimper?

The three previous installments, if you include the Hit-Girl prelude, have all been incredibly entertaining and came across as a very good and unique look at just what it would truly mean to be a superhero in the real world.  There are no super powers here.  No miracle resurrections.  Just a boy with a deep held feeling that he can make a difference in the world while also trying to deal with the problems that face most youngsters these days.  I loved that approach to the story, especially when in amongst the action there were some very touching and emotional moments here.  That's why I appraoched this final installment with a hesitant but excited mind.  I'll be honest, I didn't want the series to end, in fact, I wanted more of their adventures.

That said, this installment is very well written and even comes close to surpassing the original Kick-Ass stories quality wise.  The writing is spot on both action wise and pacing wise and there are some very well thought out character development moments as well.  It's almost as if we have seen the characters growing in front of our very eyes and this is the story that ends with them spreading their wings and flying the nest so to speak.

The story of Dave Lizewski really does grow and come to an incredibly satisfying end, as does that of Hit-Girl herself but there are some great twists and turns spread throughout their final adventure.  We get new characters rubbing shoulders against some of the old favourites and not once does Kick-Ass 3 feel disjointed or rushed.  There are some great and subtle scenes that really show just how far the characters involved have come.  There were also some great red herring moments as well.  One of my favourites being a scene where you think Dave has unintentionally created his own super nemesis only for it to end in an unexpected way.

With the art being once again handled by John Romita Jr., you just know that style wise, you are going to be for a real treat and he doesn't disappoint at all.  In fact, like the story, the art just seems to get better and better as the series goes on.  There were some incredibly violent scenes that popped off of the page as if you were watching a movie unfold in front of you yet they mix with some quiet, subtle scenes that are just as detailed and interesting without it feeling out of place.  That is the real mark of a great artist and Romita Jr. is definitely one of those.

All in all, this is a near perfect end to the story of Kick-Ass and Hit-Girl.  The only thing wrong with this collection is honestly that it means that there will be no more adventures but with this ending, especially the way Dave's story ends, this is the best way for the team to bow out.