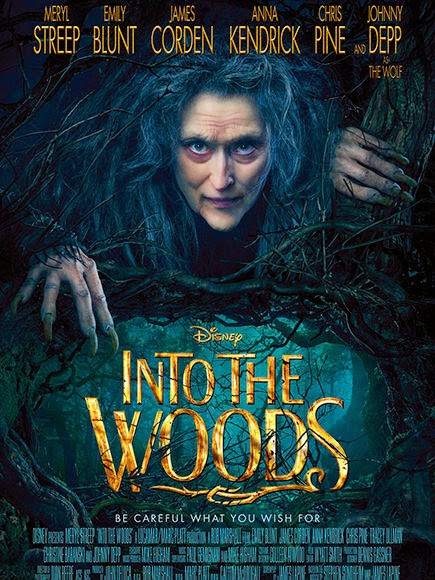 Based On the Stage Musical By
James Lapine
Stephen Sondheim


A witch tasks a childless baker and his wife with procuring magical items from classic fairy tales to reverse the curse put on their family tree.


I love musicals.  Give me a musical with a great story and cast combination and I am a very happy man.  Hairspray, Sweeney Todd, I just can't get enough of them.  This one?  Not so much.

With such a brilliant cast, the massive budget set by those folks at Disney, the brilliance of Stephen Sondheim and the direction of Rob Marshall, there was just no way that this movie would possibly be anything but brilliant.  So what went wrong?

The movie itself looks utterly breath taking.  The sets, the scenery, it just looks like a fairytale world brought to life on the big screen.  That was the first thing that struck me the most but the second thing was just how quickly this movie went down the drain.

While the songs aren't terrible, I can honestly say that the songs and the performances of them just didn't come across as memorable in the slightest.  I've not seen the stage musical that this is based on so maybe the songs come across better in that kind of setting but here, they just felt nearly lifeless.  That said, I have to admit that Chris Pine, known to us science fiction nerds as Kirk in the new Star Trek movies, has a surprisingly good voice.

It's the same problem with the acting.  Anna Kendrick gives it her best to bring Cinderella to life but, as with a lot of the other characters, they just come across as so utterly forgettable or even unlikeable that you find yourself not caring at all about their stories.  I know that the story itself is meant to be an almost satire style look at the world of the fairy tales we grew up with but the performances here just made the characters so flat that the movie felt a lot longer than it actually was.  The best of the performances here, although that's not saying much really, is that of Meryl Streep as the witch that sets the whole movie off.  She was wonderfully creepy and one of the two reasons I tried to carry on watching this one.

The performance that really fell badly wrong was the gross miscasting of Johnny Depp as the wolf.  He gives such a creepy, and not in a good way, performance as the wolf that he came across as a pedophile just released from prison with the way he was with the Red Riding Hood character and made me very uncomforable watching it.

One of the things that shocked me the most about this movie, other than how bad it was, was the rating.  How on Earth it got a PG rating is beyond me.  I'm not a prude in the slightest but how can a movie that has songs mentioning rape, a character that is a pedophile, sexualising the young characters, frightening deaths and scenes of a wolf being killed as well as someones toe being cut off to fit in a shoe be worth a PG rating?  Shocking.

With such a cast as this and the gigantic form known as Disney behind this movie, I really can't understand just how they could get a movie so badly wrong.  Advertised as a family movie, I really wouldn't take the little ones to see this one at all.

One of the worst Disney movies that I have ever seen and they have made some stinkers in their time.  I think I've been probably over generous with the score but Meryl Streep being brilliant as always made me want to add another point to it.

Posted by Pat Scattergood at 09:17