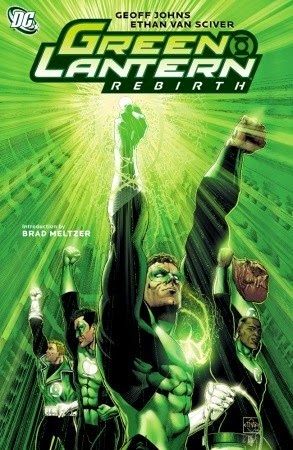 
Hal Jordan was the greatest Green Lantern of them all, until his shocking fall from grace.  Now witness his awe-inspiring redemption at the hands of writer Geoff Johns and artists Ethan Van Sciver!

Hal Jordan was always a hero.  Among all Earthmen, he was appointed Green Lantern of Sector 2814, to impose his emerald will in the pursuit of universal peace.

But when he failed to prevent the destruction of Coast City, fear took hold of Hal Jordan's heart, corrupting his every action.  His will was no longer his own.

Now, a struggle for his soul determines the fate of the galaxy and the evil that attempts to consume it.  Hal alone has the power to cast his light across the universe and change Blackest Night to Blackest Day!


When DC embarked on the whole New 52 venture, I have to admit that while some of the titles that came from that were good and well thought out stories, a lot of them just seemed there to make up the numbers so to speak.  As well as Marvel recycling a lot of their old stories and updating them, I kind of soured on the Big Two and started to read a lot more indie stuff.

With the stories before this collection having dealth with Jordan's fall from grace and his descent in to 'evil ways', Green Lantern: Rebirth was always going to be a risky story to tell.  If written well then this would be a superb way to return Jordan to his place as the best Green Lantern that DC have had, in my opinion.  Written badly then it would be little more than a cop out and erase all the stories that came before it.

When you have someone like Geoff Johns at the helm, you just know that this is going to be an absolute belter of a story and it truly is.  Johns not only writes a story that heralds the return of Jordan but does so in a way that not only makes sense but brings together all the ends from the previous stories.  I truly believe that is one of Johns main strengths with his writing.  In fact, I'm yet to read a bad story that he has written and to be honest, he was and is one of the main reasons that I will still pick up one of the Big Two titles.

The story here is exciting, well paced and has some truly heart breaking moments amongst all the action.  That's what makes this return story to utterly gripping.  While the story is one of absolution and morality, it is still a story of one man trying to write his wrongs to feel human again.  This is going on slap bang in the middle of the rest of the stories and they all tie up brilliantly.  In fact, Johns has managed to write this emotionally gripping and exciting story so well that even if you haven't read the other installments that this one will still have the same impact.

Some of that impact is down to the absolutely gorgeous art by Ethan Van Sciver.  One of my main complaints of the art used in DC and Marvel comics is that it can sometimes look too clean and clinical yet here, Van Sciver keeps the clean look but isn't afraid to let the art become dirty and gritty in order to bring the action to life.  While the action sequences here are one of the main high points of the collection, Van Sciver really breathes life in to the quieter scenes.  His use of facial expressions and such really bring the characters and their personalities to the forefront in a big way and that helps to suck the reader in to their world and want to turn over page after page just to see what is going to happen next.

Green Lantern: Rebirth is one of those types of stories that a fan can come back to again and again, noticing new things each time.  In fact, this one is one of the best examples of that.  Johns and Van Sciver worked so well on this title that it actually reignited my love of the Green Lantern character to the point where I have been grabbing more and more of his stories recently.

Definitely one to pick up, especially considering you can get it for next to nothing online so there's really no reason to not add this absolute gem of a title to your collection.