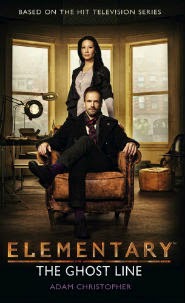 
A brand-new novel tie-in for the popular Elementary TV series. A summons to a body found riddled with bullets in a Hell’s Kitchen apartment is the start of a new case for Sherlock Holmes and Joan Watson.

The victim is a subway train driver with a strange Colombian connection and a mysterious pile of money, but who would want to kill him?

The search for the truth will lead the detectives into the hidden underground tunnels of New York City, where more bodies may well await them.


I was drawn to this book because of the simple fact that I like Sherlock Holmes stories no matter what style they take.  I don't mind if it's the old classics from Sir Arthur Conan Doyle or some of the various takes on the classic detective that have come from the likes of George Mann recently.

This take on the familiar character by Adam Christopher takes on the form of the Johnny Lee Miller version from the television show Elementary.

One of the things that I found most interesting from this novel is just how involved the actual crime is.  Christopher manages to blend the ticks and the personalities of the characters well to match the television versions but I would have to admit that it's not the most successful part of the book or the most interesting.  It's well done but I was more interested in the crime side of things.

The story itself takes the cliched setting of New York as a back drop, as do most crime shows and books these days, but it's when they get down to investigating the actual crime that the story really shifts gears and becomes a much better novel.  I loved just how the team that were assisting Holmes seemed to both be in awe of this version of the classic detective but also a little scared too.

There were a lot of twists and turns through out the novel that really worked well.  When you get to the solution of crime itself, I have to admit that Christopher's talent at creating tension and dread really came to the forefront here.

I will admit that I did prefer The Burning Dark, one of Christopher's other recent novels, but that doesn't mean that this one isn't worth reading.  Far from it.  If you are a fan of Elementary then this is a book that is well worth picking up, you won't be disappointed.